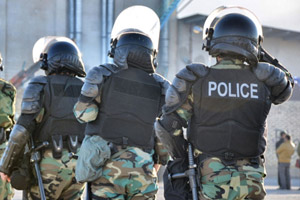 Following the July 14 Iran nuclear deal, a number of European officials have begun making the trek to Tehran in the hopes of reestablishing economic contracts with the mullahs’ regime. But these officials are failing to pay attention to the dramatic deterioration in the human rights situation and the rapid rise in the rate of executions in Iran.

The Iranian authorities are believed to have executed an astonishing 694 people between 1 January and 15 July 2015, Amnesty International said last week, in an unprecedented spike in executions in the country.

“Executions in Iran did not even stop during the holy month of Ramadan. In a departure from established practice, at least four people were executed over the past month,” the human rights group said. “Iran’s staggering execution toll for the first half of this year paints a sinister picture of the machinery of the state carrying out premeditated, judicially-sanctioned killings on a mass scale.”

At least 27 prisoners have been executed in Iran in the past week alone. That’s close to four executions per day. Yet European officials have remained mum on the mullahs’ appalling human rights record.

In the nine months that Ms. Mogherini has taken office, some 1,000 prisoners have been executed in Iran, women have faced the most severe pressures, and religious and ethnic minorities have faced extensive repression and discrimination; however, Ms. Mogherini has refrained from uttering even a single verbal condemnation of these daily atrocities. This is disgraceful for the EU whose very foundation is based on countering fascism and supporting democracy and human rights.

Ms. Mogherini met with those responsible for 120,000 political executions, including the massacre of 30,000 Iranian political prisoners (members of the PMOI) in the summer of 1988, as well as those bearing chief responsibility for the export of terror and fundamentalism to the region.

To welcome her in Tehran, the regime hanged a group of 11 prisoners in Karaj on Monday. Yet in her op-ed on Tuesday in the Guardian’s Comment is Free, Ms. Mogherini failed to even remotely refer to a need for Tehran to improve its human rights record.

Other senior European officials who have already gone or plan to go to Tehran following the nuclear accord have been equally silent on the human rights violations in Iran.

Let’s face it. Calling Hassan Rouhani a ‘moderate’, if not done for sinister political objectives, is delusional. In the less than two years that he has been in office as President, the regime has executed more than 1,800 prisoners, more than in any similar period in the past 25 years.

Last December, the United Nations General Assembly slammed the flagrant violations of human rights by the Iranian regime, and according to Mr. Ahmad Shaheed, the U.N.’s special rapporteur on human rights in Iran, under Rouhani “the overall situation has worsened.”

Dr. Alejo Vidal-Quadras, former Vice-President of the European Parliament, on Tuesday rightly said: “It is an illusion to imagine that the nuclear agreement will lead to an improvement in the human rights situation in Iran. All the signs indicate that the agreement will embolden the mullahs to further abuse their citizens and to prevent an opening of the political atmosphere which could lead to a repeat of the upsurge of anti-government sentiments that took place in the 2009 uprisings.”

As such the trips by Ms. Mogherini and other EU officials to Iran under the mullahs’ rule run counter to the national interest of the Iranian people and their determination to overthrow this regime and establish democracy and popular rule in Iran.

Good political sense dictates that Ms. Mogherini and co. who visit Iran speak out against Tehran’s abhorrent human rights abuses and nefarious conduct in the region and defend the Iranian people’s basic rights. They should make it clear that any improvement of relations with Tehran would depend on an improvement of the human rights situation and an end to the killing spree and Tehran’s export of terror and fundamentalism. It must be made clear to the Iranian authorities that they would be held accountable for their crimes against humanity both inside Iran and abroad.

Previous article
27th anniversary of massacre of 30000 political prisoners in Iran
Next article
U.S.: Iran officials involved in the human trafficking of women