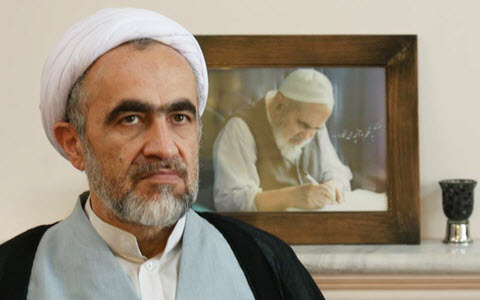 NCRI – Ahmad Montazeri, son of Hossein-Ali Montazeri, Khomeini’s former heir (who revealed a shocking audio tape On August 9, 2016 in which Montazeri can be heard telling a meeting of members of the “Death Committee” 28 years ago (August 15, 1988) that they are carrying out a crime against humanity), said in an interview on May 29 that he hoped in the future cabinet of Hassan Rouhani, to respect the people of Iran, Mostafa Pour-Mohammadi would not be present.

Ahmad Montazeri earlier had described the nomination of Ebrahim Raisi for the presidential election as an insult to the people of Iran. About the presence of Mostafa Pour-Mohammadi in the Cabinet as Minister of Justice, he said: “In the presidential election, choosing was between two people and between two mindsets. Mr. Raisi wanted to take control of the whole Cabinet and Mr. Pour-Mohammadi constitutes a unit and a percentage of the Cabinet. But the message of the people about issues related to Rouhani’s rival was very clear and Rouhani himself stood with the people and during the elections several times criticized pressure methods and exclusions and executions, so I think Rounai will not introduce Mr. Pour-Mohammadi in this round. “

It should be noted that during the power struggle over the regime’s presidency, Hassan Rouhani attacked Ebrahim Raisi, and on April 18 in Hamadan said: “The people do not agree with those who during 38 years knew only prison and execution.”

Later in the interview, Hossein-Ali Montazeri’s son said: “Although it is true that this is Mr. Rouhani’s last round of presidency…, but he has to fulfill his promises to the people to make them hopeful. If people are disappointed, a great national damage will be done … Pour-Mohammadi was one of the four member panel and it is also clear in the published file. I hope that in the next government, he is not introduced to respect the honorable people of Iran.”

Site and Telegram channel of Montazeri on August 9, 2016 published an audio file which is related to the August 15, 1988 meeting of Hossein Ali Montazeri, Khomeini’s then successor, with judicial and security officials called “Death Committee”.

In this audio file, Montazeri called the executions of 1988 as crime and said: “…the greatest crime committed in the Islamic Republic, for which the history will condemn us, is being committed by you. In the future your names will be itched in the annals of history as criminals.” At the meeting four judicial authorities, Ali Nayeri, Morteza Eshraghi, Mostafa Pour-Mohammadi and Ebrahim Raisi were present and were the audience of Ayatollah Montazeri.

Ahmad Montazeri said: “The truth must be said but unfortunately, the authorities conceal the truth and this cover-up is to the detriment of all. First, people are deprived from knowing historical truth of their country and these historical events, which brought a lot of damages, must be taken as experience so that in the future they will not happen again. People need to know what happened in their country. In addition, if the four men who were in this issue tell the truth, they may partly defend themselves and say in what form the original sentence was and on implemented on who, and how inappropriate it was about those who were captive and imprisoned and were not involved in it, and have the opportunity to apologize to the people. In any case, transparency is the best way …”

Previous article
Iran: Stock Losers of Financial Firms Rally in Various Cities
Next article
Iran: Crackdown on People in Ramadan Under the Pretext of Eating in Public