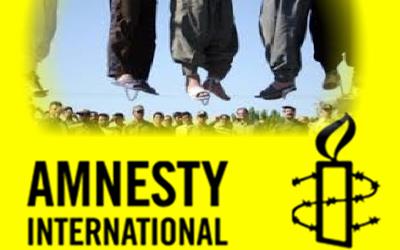 NCRI – Iran’s regime executed close to a thousand people, including juvenile offenders, in 2015 and largely fueled the “dramatic global rise” in the number of executions recorded last year which saw more people put to death than at any point in the last quarter-century, Amnesty International said in a report on Wednesday.

“Iran put at least 977 people to death in 2015, compared to at least 743 the year before,” Amnesty International wrote in its annual Death penalty 2015 report.

“Iran is also one of the world’s last executioners of juvenile offenders, in flagrant breach of international law,” the report said. The Iranian regime put to death at least four people who were under 18 at the time of the crime for which they were convicted in 2015, the human rights group said.

“Iran alone accounted for 82% of all executions recorded” in the Middle East and North Africa, Amnesty said, adding that the regime continued to sentence people to death for crimes – including drug trafficking, corruption, “adultery” and “blasphemy.”

According to Amnesty’s figures, the Iranian regime was responsible last year for nearly 60 percent of all executions in the world with the exception of those in China.

“This slaughter must end,” he said.

Previous articleGermany: 3 charged over valve deliveries to Iran regime
Next articleMeeting at the French National Assembly