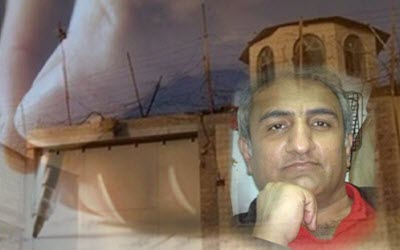 NCRI – Iranian political prisoner Afshin Baymani who is languishing in Iran’s notorious Gohardasht (Rajai-Shahr) Prison in Karaj has written a moving open letter about his suffering at the hands of the mullahs’ regime.

Mr. Baymani, in his mid-forties, who suffers from a serious heart condition, is being held in Ward 4 of Hall 12 of Gohardasht Prison in Karaj, north-west of Tehran. On Sunday he was refused hospital treatment by the authorities after suffering what appeared to a heart attack earlier in the day.

Mr. Baymani, a father of two, has been imprisoned for some 16 years in Tehran’s notorious Evin Prison and Gohardasht Prison in Karaj for allegedly helping his brother evade arrest. Mr. Baymani was originally sentenced to execution on September 6, 2000, but his sentence was commuted to life imprisonment six years later.

The following is the text of his open letter which has been smuggled out of prison:

Sixteen years ago when I was solitary confinement, after several months of interrogations, one day I asked my interrogator: I haven’t done anything, for how much longer will I be kept in solitary confinement and when will I be released? He smiled and said, “If you be a good boy and do what you are told, your file is alright and you will soon be set free.”

When I was being taken to the court I asked the officers in the vehicle why it took so long to take me to court? They all laughed and said an hour-long trip to the park by Haji (the cleric in charge) will see your case delayed for a year.

I didn’t understand them.

In the court I asked the judge when he will order my release. He looked at me and said that he would not let me languish in prison for more than five years.

In Detention Center 209, one morning they took me to an interrogation room where Jafari, the man responsible for judicial matters, was present. It was exactly 9 am that he gave me a 20-page file and instructed me to read and sign it. I was delighted and started to read. None of the paragraphs related to me. The name of a lawyer was also written in it, but I had never seen him. At the end it said I had been sentenced to death. I told Jafari that this file has nothing to do with me. He replied: “Sign it. I’m in a hurry. Whether it relates to you or not is someone else’s decision. Since this was the first time I faced such a situation and I could not comprehend the term “execution,” I uncontrollably signed it.

After a while I was under so much duress that I wished that they would execute me. For five years this suffering endured for me and for my family.

One afternoon they told me that my interrogator had come. Along with several other prisoners, hands and feet bound in chains, I was transferred to the Solitary Section of Ward 204 of Evin Prison. On the way I learned that they are taking them for execution; so I tried to comfort them. Little did I know that I too am being taken for the same purpose. When we arrived at Ward 204 I asked one of the officers called Kolivand why they have brought me here. I told him that I have been told that my interrogator has come. He quickly replied: “Get inside the cell. You too are here to be executed.”

When I heard what he said my feet and my back uncontrollably trembled. For several minutes I was dazed. Then, for several hours I uncontrollably wept for my wife and my two dear children. I didn’t want to leave them alone. Hours passed by that are just indescribable.

Anyway, there was a Quran there and I picked it up to read. It comforted me. I wept some more and read some more… finally I calmed down and prepared myself to be hanged. Three days passed by in this fashion and I was in a state of limbo. They returned me from solitary in Ward 204 back to Ward 209. At that moment I bid farewell to my wretched life and five years in prison and I suddenly felt a tranquility that I had never before experienced in my whole life. I saw my interrogator in Ward 209. With a repugnant smile he told me that my sentence has been commuted to life in prison. I stared at him and asked him why they kept me on the verge of execution for three days and made me suffer so.

Again in my seventh year in prison I saw an interrogator and I told him I wish to be executed to escape this humiliating life. He smiled and told me that they will treat me in such a way that I would wish death a hundred times a day… I didn’t believe him, but now that almost 10 years have gone by from that encounter, I feel that he was telling me the truth…

Now, I am asking all international and Iranian institutions to at least call on the regime to return to me my death sentence and to hang me along with dozens of my cellmates that are hanged every week in this slaughter house of Gohardasht [Prison] so that I can finally be set free from this life which is full of lies, hatred and deception and so that I no longer have to suffer witnessing the execution of my friends.

If anybody doubts my – Afshin Baymani’s – innocence then they should think for a moment about two people who came [to Iran] from Camp Ashraf with a mission. One was my brother Mehdi and the other was Arash Sametipour. My brother fought to the end for his ideals and gave his life for his ideals. Arash Sametipour was wounded and captured by the Intelligence Ministry (MOIS). How is it that Arash was released from prison after a short while and is now spending his days wandering the streets of Europe, but I who have never been to Camp Ashraf nor had any formal ties with such organizations, have had to spend 16 years of my life in the worst conditions, and so did my family?

If you ask me, I’d put it simply: My brother loved the People’s Mojahedin Organization of Iran (PMOI or MEK) and he did not surrender and he sacrificed his life for his path and goal; Arash Sametipour sold himself to the Intelligence Ministry and is now free; and I, Afshin Baymani, who was not a member of the PMOI but never allowed myself for a second to become a hireling of the Intelligence Ministry either, now have to languish in prison.

Bring my noose; I long for it …