NCRI – Reports coming from Iran indicate that anti-government demonstrations and protests in northwestern provinces has continued and spread to more places. In the meantime students in Tehran including Tehran University and Allameh Tabatabai University staged demonstrations in solidarity with their Azeri compatriots.

"Death to tyranny," "death to apartheid," "death to fascism" and "we want no nuclear bomb" chanted students in their demonstrations in Tehran. 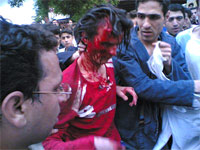 Students announced that dozens of people were killed or wounded in clashes in Tabriz and Orumieh when suppressive forces attacked. To honor the dead students wore black bands on their arms.

In fear of further spread of protests and unrest, the clerical regime organized a rally in which they blamed the People’s Mojahedin for the uprising. The state-run news agency IRNA said demonstrators chanted slogans against the PMOI, the US and the UK.

Najaf Aghazadeh, head of the Justice Department in Eastern Azarbaijan, blamed the unrest on foreign agents trying to take advantage of protests to create insecurity.