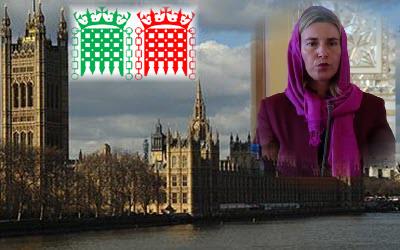 NCRI – The following is the text of a press release by the British Parliamentary Committee for Iran Freedom calling on European Union foreign policy chief, Ms. Federica Mogherini, to cancel her upcoming visit to Tehran in light of the appalling human rights record of the mullahs’ regime:

The planned visit to Iran by Europe’s most senior official on foreign affairs and similar travel by other European state officials is highly inappropriate considering the regime’s domestic repression and destructive policies abroad.

During the “moderate” administration of Hassan Rouhani, nearly 1000 people were executed in Iran last year alone, including juveniles in violation of international law. At least 47 journalists and social media activists were reportedly detained in the country as of January 2016, according to reports by the UN Special rapporteur for Iran and Amnesty international.

This is in addition to Tehran’s destabilising actions and support for terrorist groups in the region as well as pressing ahead with its missile programme in clear defiance of the international community and regional concerns.

The EU should not allow itself to be deceived by Rouhani’s charm offensive and his unfulfilled promises of “moderation” and instead pay close attention to the bellicose rhetoric coming out of Tehran. The Iranian Supreme Leader, who holds the ultimate power in the country, declared recently that “missiles, not talks, are key to the regime’s future” emphasising that “Those who say the future is in negotiations, not in missiles, are either ignorant or traitors.”

The BPCIF believes and reiterates that “it was a mistake by the West to decouple human rights concerns and Tehran’s support for terrorism from the nuclear negotiations”. The Iranian regime’s behaviour at home and abroad following the nuclear deal last Summer only confirm our position and refute the notion that concessions will encourage the regime in Tehran to alter its unacceptable behaviour.

Learning from past mistakes, the European efforts to build on last year’s nuclear deal must address the ongoing human rights abuses in the country, the regime’s destabilising role in the region and its support for Islamic fundamentalism and terrorism.

Hence, the approach to boost economic ties encouraged by these European officials is dangerously misguided and provides the theocratic regime in Tehran with an opportunity to present itself as the representative of the Iranian people instead of their oppressors.

The first step to right this policy is for the UN Foreign policy chief to limit Europe’s deliberations with Tehran officials to International forums and cancel her planned visit to Iran.

While urging Ms Mogherini to seriously consider this step, the BPCIF calls on the UN Foreign policy chief to publicly name and shame the Iranian authorities for their blatant human rights abuses and destabilising actions and demand that they put an end to such unacceptable behaviour.

European official must publicly make it clear to the regime in Tehran that the reopening of full relations and the reintegration of Iran into the community of nations is contingent upon concrete and verifiable human rights improvements, including an immediate stop to executions, torture and persecution of activists and dissidents. Tehran must also adhere to the UN Security Council resolutions with regard to its missile programme and ending its military and financial support for the Assad regime in Syria, the terrorist group Hezbollah and Shi’ite militias in Iraq and Yemen.

The BPCIF urges and expects the UN Foreign policy chief to place pressure on Iran in the above respect, especially if Ms Mogherini decides to overlook our recommendation and go ahead with her visit to Iran.