Coronavirus Outbreak in Iran: The Regime Is Behind Killing Nearly 14,000 People

According to the People’s Mojahedin Organization of Iran (PMOI/MEK), the coronavirus has so far claimed the lives of over 13,600 people across Iran. The reason for this increasing death toll in Iran is not just the virus, it is the regime’s inaction, cover-up and mismanagement.

Yet, since this outbreak, instead of taking action or telling the truth about the dimensions of this crisis to the Iranian people, the regime has either blamed the United States sanctions, or foolishly spoken of “bioterrorism,” and has also increased oppression and arrests of those who tell the truth about this the deadly virus.

The contradiction in the officials’ remarks and the regime’s hypocritical action in rejecting the offers of help by the international community, especially the U.S., yet whining about the sanctions confirms a painful truth: The regime has taken the Iranian people hostage and it bargains over their lives to achieve its goals. The U.S. sanctions have paralyzed the regime’s funding of terrorism, the growing public abhorrence and clear demands of the people from the regime during the Iran protests in November and January have made the regime weaker than ever. In order to prolong its life, the regime must increase domestic oppression and manipulate the international community to lift sanctions so the regime could pursue its warmongering policies and fund its machine of terrorism, particularly since the elimination of the Revolutionary Guards Quds Force (IRGC – QF) commander Qassem Soleimani. Yet the regime’s fear of another public uprising has put the regime in another deadlock. It is unable to help the people due to its institutionalized corruption and anti patriotic nature, which has resulted in an increasing public anger. So, to avoid another uprising the regime’s officials have either been spreading rumors of U.S. bioterrorism or try to downplay the dimensions of the crisis. In a nutshell, the chain of events confirm that the regime is neither willing nor capable of taking control of the coronavirus outbreak, which has turned Iran into COVID-19’s killing zone for the Iranian people and an epicenter of this deadly virus.

For weeks the regime denied the existence of this virus in Iran, then has been trying to downplay its dimensions and has until now, refused to quarantine cities.  The regime’s president, Hassan Rouhani, blatantly said on March 19 that: “We learned on February 19 that the corona had come; meaning that tests in Qom were also tested in Tehran and the result showed that they were positive. This was Tuesday night, February 18 and on Wednesday morning, February 19, we told the government and the public; we did not delay even one day. Although elections were scheduled for February 21, we could have waited and announced on February 22. But we did not do that and spoke honestly with the people.”

In addition to Rouhani, the regime’s supreme leader, Ali Khamenei said on March 3 that, “This disease is not serious; we have seen more disastrous calamities than this.” He called it a “fleeting event,” nothing “extraordinary.” Khamenei added: “Our officials have revealed information since day one with enthusiasm, honesty, and transparency, and they informed the people.”

According to the reports published by the National Council of Resistance of Iran (NCRI): “Documents of the National Emergency Organization show that on February 4, 2020, in addition to Qom, a significant number of patients had been hospitalized in Tehran. Several had been taken to Khomeini, Yaftabad and Masih Daneshvari hospitals in Tehran.” These documents are Mission Reports issued by the National Emergency Organization – Province of Tehran, Emergency services. One of these documents reads:

22/51/10**5173* Vard Avard/Main Street/ Qassem-Ali Yousefi Alley, Building Number 13, to the emergency and after initial action, hospitalized in Khomeini Hospital. “The Patient is a male, 30 years of age, with fever and shivering, suspected of Coronavirus and was transferred while taking protective measures. Because [the first responders] had to wear protective gear, and inform the 800, and the shift supervisor, the transfer took longer.” 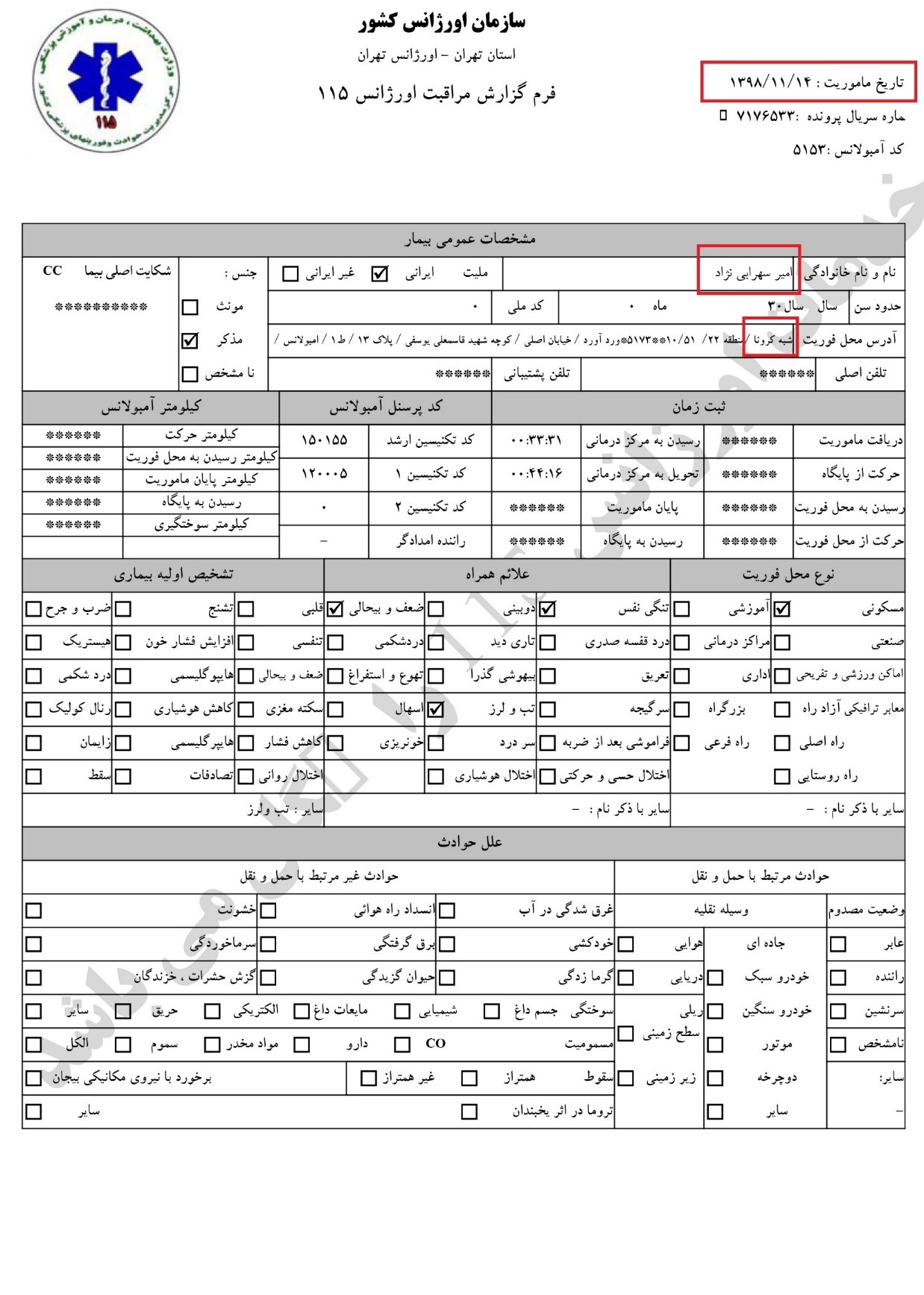 This regime resorted to this deadly cover-up in order to have a larger turnout in its February 21 sham parliamentary elections and the revolution anniversary marches on February 11.

In an unabashed admission two days after the election, the regime’s Interior Minister, Abdolreza Rahmani Fazli, said: “Some had recommended delaying the elections, and insisted on delaying elections in Qom. But, as the official in charge of the elections, I refused to approve these recommendations.”

Bioterrorism, another foolish yet criminal excuse of the regime

On March 22, Khamenei while rejecting the U.S. offer of help, said: “Firstly, you (The U.S.) are facing shortages of your own … If you have anything, use it yourself. Secondly, you have allegedly produced the virus. One must be insane to trust that you will bring medicine. Your drugs may even spread the disease further or make the virus permanent. Or, if you send a doctor or physician, you may want to closely test the toxic effects of the virus you have created. Because it’s said that given the knowledge about Iranian genes, part of the virus has been especially created for Iran.” Khamenei’s conspiracy theory wouldn’t fool anyone, it only shows regime’s desperation. In this regard, Mrs. Maryam Rajavi, the President-elect of the National Council of Resistance of Iran (NCRI), said: “Khamenei’s shallow and demagogic rambling reflect, in addition to his cruelty about the (Coronavirus) patients, his despair and passivity emanating from the mortal deadlock engulfing the regime and concern over popular uprisings. While this disaster has swept across Iran and the number of victims continues to grow, Khamenei did not offer any solutions, nor not even a promise to help the people.” “Khamenei’s drivel about the production of the virus by the U.S is a desperate attempt to cover up the regime’s incompetence in confronting the disease and the mullahs’ criminal role in the explosive spread of the virus nationwide and to divert the people’s anger, and disgust towards the U.S. But these justifications no longer work and only exacerbate the people’s rage,” Mrs. Rajavi added.

The regime’s apologists claim sanctions imposed by the US on the regime because of its malign activities have resulted in the scarcity of the medical equipment, making more people vulnerable to COVID-19.

In addition to the Khamenei’s remarks, the world was shocked to learn of the regime expelling the Doctors Without Borders (MSF) who had gone to build a makeshift hospital in Iran. Rouhani shamelessly said that over 20% percent of hospital beds are empty. If this is the case, why do they keep claiming sanctions are the reason behind medical shortage and the spread of the virus?

The truth is the regime has the necessary resources to help the Iranian people. Footages obtained by the MEK from Iran show the IRGC hoarding masks, disinfectants and other medical equipment.

A report published by the “Asra think-tank” which is close to Khamenei unveiled the truth and the regime’s real concern. The report said: “With the spread of the coronavirus to the whole country, the shortage of health and hospital equipment was quite evident, and widespread hoarding was taking place in these areas. This led to market turmoil and increased prices for these commodities. Rising prices and a shortage of goods in the coming months, and with the spread of the virus, could lead to the looting of stores and pharmacies.”

The solution to this crisis is the regime’s downfall. As Mrs. Rajavi said, it is “Through rebellion and waging a struggle that is a hundred times greater, the mullahs’ rule, characterized by crimes and cruelty, will be overthrown and the great spring will arrive after this cold and bleak winter.”

Mrs. Rajavi reiterated: “The international aid should be directly provided to hospitals and the public without the intervention of the mullahs’ predatory regime. The World Health Organization, therefore, must in particular help these disadvantaged people because the regime will do nothing for them.”

Previous articleLatest News in Brief – March 30, 2020
Next articlePrisoners’ Rebellion in Iran Amid Coronavirus Outbreak: An Existential Threat to Regime