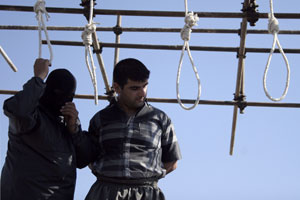 Inhumane and degrading punishments have for years been common practice by the clerical regime in Iran. Yet, since the nuclear deal last month between the mullahs’ regime and the major world powers these grave human rights violations have sharply increased.

Twice this week, the fundamentalist authorities amputated a prisoner’s right hand and left foot and bragged about doing so in their state media, and last Saturday the regime sentenced a man to have his eyes gouged out.

And for the first time in its recorded history last week it paraded women, chained to men, in the streets of Tehran to humiliate them before their own communities for failing to conform to the mullahs’ fundamentalist preaching.

The skyrocketing rate of executions is another aspect of major concern. In just over a fortnight, the Iranian regime has hanged at least 64 prisoners, including two women, in some cases in public.

Anyone familiar with the fundamentalist nature of the mullahs’ regime and its conduct will not be taken aback by the increase in suppression in Iran despite Hassan Rouhani’s facade of “moderation.”

Lacking popular support, the regime’s strategy for survival has always hinged on three pillars: Domestic suppression, export of fundamentalism, and nuclear weapons development. After accepting to forgo major elements of its nuclear projects, it’s only natural for the regime to try and strengthen its two remaining pillars.

The Iranian population is restless for change, in part due to a faltering economy. The mullahs’ regime, incapable of reform, is stepping up suppression of the population to compensate for the defeat of its nuclear strategy and discourage any element of anti-regime protests or uprisings by a people who now sense that the regime has become weaker by abandoning – albeit temporarily – its nuclear weapons projects.

In the meantime, the deafening silence of the Obama administration and European leaders towards the regime’s egregious human rights abuses in inexcusable. It only encourages the mullahs to suppress the population with even greater impunity.

It’s high time the U.S. and Europe make human rights a focal point of their Iran policy. Any improvement of relations with Iran should be contingent upon an end to executions and human rights violations. Anything short of this is immoral, unacceptable and politically counter-productive.