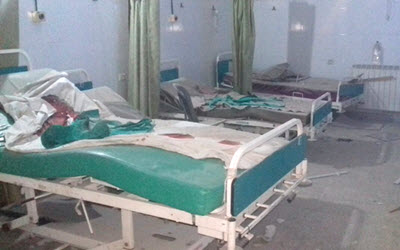 NCR – In an interview with Simaye Azadi (Iranian Resistance Satellite TV) on October 8, Dr. Fariba, a noble doctor who in most difficult conditions in the beleaguered but resistant city of Aleppo continues to provide medical services, explained the city’s situation and humanitarian crisis concurrent with the military ground offensives by Assad regime’s and Iranian regime’s mercenaries dispatched to the city.

Dr. Fariba said: “There is no food or medicine in Allepo. The available medicine is good for only a short and limited period. There is no electricity… and water was cut off for a full week… The medical condition of hospitals is extremely dire. Many hospitals were targeted last week. Now hospitals… work with a minimum efficiency and can only respond to emergency cases, fearing the hospitals especially patients being targeted by the bombing.”

“During this period, our patients are suffering from Anemia which is also due to malnutrition. The Iranian regime’s militias are trying to attack the city of Aleppo. They have been attacking Sheikh Saeed neighborhood for a few days and are also trying to attack Suleiman al-Halabi neighborhood. The militants attack on Aleppo could lead to the massacre of 300 thousand inhabitants of this city. Save Aleppo.”

Previous articleProtests in solidarity with Justice-Seeking movement for the victims of 1988 massacre
Next articleThe Flogged Students were threatened by agents of the Iran regime.