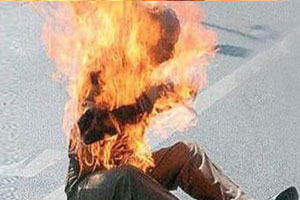 NCRI – Following several recent cases of self-immolation outside government offices in Iran, a man in his forties from the town of Malekan, north-west Iran, set himself on fire outside the local offices of the Iranian regime’s judiciary last week.

The man, identified as Sirus Neek-khu, 45, set himself ablaze on Monday, September 28, in protest to the failure of the authorities to see to his grievances. He had asked the authorities to launch a proper investigation into the kidnapping of his 14-year-old daughter. But the regime’s judiciary officials in Malekan, situated in East Azerbaijan Province, had ignored his requests.

According to his relatives, Mr. Neek-khu suffered 70% burns on his body and later died of his injuries. He was buried under tight security on Saturday, October 3 to prevent a large gathering and anti-regime protests from forming.

Since Saturday, the judiciary offices in Malekan have been closed, and people are prevented from entering the premises.

The regime’s judiciary chief in the city has summoned Mr. Neek-khu’s relatives and threatened to arrest them if they report the incident to the media.

Numerous cases of self-immolation in Iran in recent months have drawn special attention, including the cases of Omid Rashedi, 36, from the south-western city of Ahwaz; Mansour Keyhani, a retired teacher from Sanghar, western Iran; Ali Akbari, 45, a laborer from Tehran; Hamid Farokhi, 43, a street vendor from Tabriz, north-west Iran; and Youness Asakareh, 31, a laborer from Khorramshahr, south-western Iran. In all these cases, the self-immolations had an element of protest against the ruling mullahs’ regime.