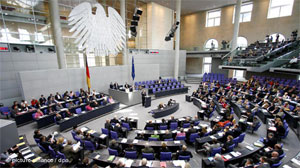 NCRI – Members of Parliament in Berlin have raised serious concerns about the deteriorating and abysmal human rights violations committed by the clerical regime, according Deutsche Welle on Thursday. The Bundestag also expressed particular worry regarding two German journalists detained in the Iranian city of Tabriz.

During a parliamentary debate on Thursday, members also pointed to Sakineh Ashtiani, a woman sentenced to stoning by the mullahs, saying that she lives under persistent pressure and fear.

Mrs. Ashtiani’s stoning sentence provoked international outrage, with many protestors around the world condemning the Iranian regime for its cruel sentences against the Iranian people.

Following the international outcry, clerical regime officials backed down temporarily, saying that the case is still under review. According to German lawmakers, the retreat signalled that the Iranian regime is vulnerable against pressures by the international community.

Still, the parliamentarians said that there is a possibility that the clerical regime would still execute Mrs. Ashtiani in the future, something that would clearly be contrary to international human rights standards.

The lawmakers also highlighted the case of two German reporters arrested in Tabriz. The two had reportedly visited Iran to interview Ashtiani’s son, but were arrested by clerical regime intelligence agents. Their fate remains unknown, despite official protests by the German Foreign Ministry.

In its statement, the Bundestag called for an end to human rights abuses in Iran by the clerical regime.

According to Deutsche Welle, MPs underscored post-June-2009 uprisings, during which massive popular protests were brutally suppressed by the clerical regime. They also pointed to the use of cruelty and violence by the regime against political dissidents, including the arrest of thousands of people and torture in prisons.

One MP said the mullahs’ courts routinely obtain false confessions from victims through pressure and force.

The MPs also supported a federal government decision to offer safe haven for Iranian political dissidents who are forced to flee the country for fear of persecution for their political beliefs.