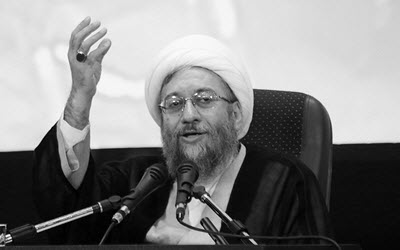 NCRI – Pointing to the political prisoners’ hunger strike, Iranian regime’s head of judiciary described reporting and highlighting such issues as a ‘criminal act’ and called on regime’s judicial authorities not be influenced by what he called ‘the media created climate’.

The state-run Mizan news agency, linked to regime’s judiciary, reported on January 17 that Mohammad-Javad Amoli Larijani, head of regime’s judiciary, has told in a meeting with supreme judicial authorities that “we should not give any chances to those who think they can enact their intentions by applying media pressure. Sometimes they assume that by creating an extensive media coverage regarding a prisoner’s hunger strike or similar issues, they can affect the judicial process or enforcement of judicial decisions, whereas such moves have no legal status and will not affect the judicial process, either.”

Regime’s head of judiciary claimed that “the holders of power and foreign countries are seeking to obstruct the judicial process and enforcement of judicial decisions by taking advantage of media, organizations and institutions.”

Regardless of regime’s terrible human rights record on the world stage, Larijani added that “I’m addressing all respected judicial authorities that if following such pressures you take the smallest step backward, they will conclude that they can force the judiciary to retreat by such media pressures, which will definitely encourage them to carry out more attacks.”

It should be pointed out that the hunger strike by a lot of political prisoners has come to public attention both inside and outside Iran.

Institutions such as Amnesty International as well as UN Human Rights Council have issued statements demanding an investigation into the situation of prisoners on hunger strike in Iran.