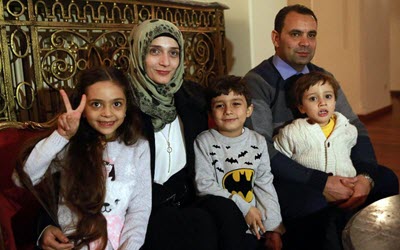 The Iranian regime wants to prolong the Syrian conflict and to encourage the partition of Syria along sectarian lines, argues Sir David Amess MP.

Mr. Amess, a Conservative MP in the UK House of Commons and co-chair of the British Parliamentary Committee for Iran Freedom, made the argument in an op-ed for Forbes on Thursday.

As the siege of Aleppo was in full swing, the mother and daughter behind a popular Twitter account went silent on social media. Before the account went dark, its last posts highlighted the imminent danger that 7-year-old Bana al-Abed and her mother Fatemeh were facing. The tone of some of those messages seemed resigned to death. The same can be said of many other social media users in Aleppo, some of whose accounts remained active after the Abed family went off the grid. (Bana and her mother were transferred out of Aleppo last month).

The persistent social media presence helped to expose many of the crimes being perpetrated by pro-government forces as they were virtually overrunning the entirety of the ancient city of Aleppo. Chilling accounts about civilians, including women and children being killed in the streets, often while trying to flee from the city as it crumbled amidst the fighting reached a global audience. The United Nations confirmed in mid-December that at least 82 people had been captured and murdered by the Assad government’s militant supporters, most of whom are backed by Iran.

Many less-prominent Syrian civilians have not made it this far. And many of those who had the ear of the international community have failed to resurface after telling stories of seeing friends, family members and aid workers murdered in front of them.

People like Bana and Fatemeh serve an important role in putting a human face on this conflict. They provide Western policy makers and their constituents with a sense of personal connection that they might never experience while the war remains so far from their shores. Of course, for the Syrian people, humanitarian groups and anyone involved with the country’s welfare, the hope is that this sense of personal connection will ultimately lead to action. Hopefully, the world will truly hear the appeal that this mother and daughter made to the West.

There is much to be done in the weeks and months ahead, if world powers are prepared to take action. The United Nations, the U.S. and its allies will have to resolutely enforce any large-scale ceasefire that emerge in the days ahead. And while it remains in effect, they will have to take a highly assertive approach to negotiating a political solution, in defiance of the failures of negotiation that had been seen earlier in the conflict.

The siege of Aleppo should prove to the international community how destructive the role of Assad’s Tehran backers are. For all the crimes of the Syrian army, it seemed poised to let rebels and civilians evacuate the city in the immediate aftermath of the conquest. The Russian defense ministry offered guarantees that a humanitarian pathway would remain open, and hundreds of evacuees went on to pass through a Russian checkpoint on their way out.

However on a Wednesday in mid-December, at least 1,000 of those same people were stopped along the evacuation route, at a checkpoint controlled by Iranian Revolutionary Guards (IRGC) and their militant proxies. This move came after the Iranians single-handedly altered the ceasefire that had been agreed upon the day before. Within a day of that move, the ceasefire appeared to have been violated, with ambulance drivers and rescue workers coming under sniper fire. The Iranian opposition, the People’s Mojahedin Organization of Iran (PMOI/MEK) even identified the command base of the IRGC for Aleppo operations.

Tehran’s behavior now and throughout the Syrian Civil War and indeed throughout the 37-year history of the Islamic Republic of Iran is not surprising. Since the seizure of the U.S. embassy in the Iranian Revolution of 1979, the regime has always used hostage-taking as a means of achieving its geopolitical ends. Now, it is applying that tactic to the civilians of Aleppo and not just to merely release people from rebel territory. On a deeper level, the Tehran regime wants to prolong the conflict and to encourage the partition of Syria along sectarian lines.

Iraq only serves to highlight Tehran’s sphere of influence, and the international community should not be blind to the threat of Iranian hegemony and the need to contain the regime to secure peace and stability in the region.

Maryam Rajavi, president-elect of the Iranian coalition of democratic opposition groups, the National Council of Resistance of Iran very much encapsulates the devious intent of the regime in Tehran being “the source of crisis in the region and killings in Syria; it has played the greatest role in the expansion and continuation of ISIS. Peace and tranquility in [the Middle East] can only be achieved by evicting this regime from the region.” Admittedly, peace and tranquility are complex goals and ones that are difficult to define. Yet the goal of saving the lives of people stranded in Aleppo and elsewhere—people like Bana and Fatemeh al-Abed.

The international community must compel Iran through political and financial pressure to step away from the conflict in order to negotiate a lasting ceasefire agreement. This is not a luxury. It is a vital necessity for defenseless people like Bana.