In a bold move, political prisoner files complaint with Tehran’s Prosecutor over 1988 massacre 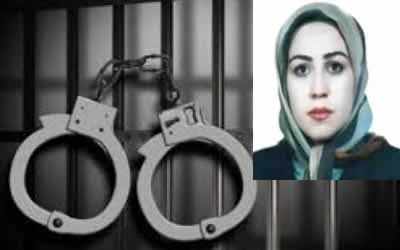 NCRI – Maryam Akbari Monfared, an Iranian political prisoner held in Tehran’s notorious Evin Prison, has written a letter of complaint to the Prosecutor General of Tehran over the arbitrary execution of her brother and sister during Iran’s 1988 massacre of political prisoners.

In a bold move from inside prison, Akbari Monfared on 18 October 2016 wrote: “My brother Abdolreza and my sister Roqieh were executed on an unknown date during the summer of 1988. They were both tried by the Revolutionary Court and sentenced to prison terms. They were deprived of their right to have a lawyer to represent them. Abdolreza was arrested when he was only 17 for selling Mojahed publication (affiliated to the People’s Mojahedin Organization of Iran – PMOI or MEK). He was sentenced to three years imprisonment in 1980, but the authorities refused to release him after he completed his prison term until he was finally executed in 1988.
“During a memorial for my other brother, Alireza, who was executed on 19 September 1981, security forces attacked and arrested my mother and sister, Roqieh. My sister who had a little daughter was sentenced to eight years in prison. In the summer of 1988 she was executed while she still had to serve another year in prison.”
Akbari Monfared further said: “The majority of jurists believe that if an innocent person is executed due to lack of awareness or misconduct of the judge, an investigation must be carried out to determine whether the execution of the innocent was intentional.”
Referring to a declaration by the second branch of the Supreme Disciplinary Court for Judges on 10 August 1985 on death sentences issued contrary to Sharia and the law, Akbari Monfared underlined the fact that the victim’s next of kin has the right to call for an investigation and prosecute.
“A principle that is recognized by Iran’s judiciary determines that no one can be re-prosecuted for a charge for which a sentence had been issued in the course of a proceeding,” she said.
Her letter also noted that her brother and sister and all other supporters of the PMOI should have been considered as prisoners of war at the time when the PMOI was in a state of war against the Islamic Republic, therefore, killing a POW would be against sharia law and the Geneva Convention on POWs that is recognized by the Islamic Republic’s constitution.
She concluded: “According to above reasoning and other available evidence, particularly the exchanges between Ayatollah Montazeri, the designated successor of Khomeini, and Mostafa Pour-Mohammadi, Hossein Ali Nayyeri, Morteza Eshraqi and Seyyed Ebrahim Raissi, the execution of political prisoners, including my sister and brother, in 1988 were against the applicable law, Sharia law and international commitments of the Islamic Republic. As petitioning before international tribunals can only be possible after petitioning before domestic tribunals, I, therefore call for an investigation into the unlawful execution of my sister and brother, and disclosure of the facts including the names of those who were responsible for their deaths, acquisition of their charges and other evidences in their files, and a criminal investigation in accordance with relevant laws in particular Article 34 of the Constitution that recognizes seeking justice as the absolute right of every individual. As the location of their burial has never been declared to the family, I, therefore, seek the facts about their deaths and the location of their burial.”
Reacting to her petition, a representative of the Tehran General and Revolutionary Prosecution Office asked, “What is she after? Those who had executed her sister and brother are either dead or very old and her sister and brother are probably buried in Khavaran Cemetery.”

He also warned that such petitions would only exacerbate her situation in prison and prevent her from being released.