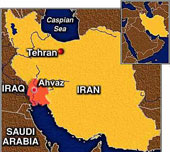 NCRI – Five Arab human rights organizations expressed their deep concern over the current wave of executions in Iran which includes those detained during the unrest in Ahwaz, provincial capital of Khuzistan, southern Iran.

Arab Commission for Human Rights, International Committee for Abolition of Death Penalty, Alkarameh Association in Defense of Human Rights, World Justice Organization, and Association Against Violence in Exile, highlighted in their statement that detainees were captured before the recent bombing in Ahwaz which was condemned by the above organizations at the time. Those executed were accused of being separatist elements possessing weapons.

According to the statement, arrests are still going on and among those taken are young people and women. The latest arrests include Mrs. Sakineh Nissi who is pregnant and currently suffering from Asma, and Ms. Maasoumeh Kaabi, 28.

The human rights organizations strongly condemned unjust trials in Iran which lack minimum international standards. They described public executions as a brutal method to create fear and called on Iranian regime to stop arbitrary arrests and executions in Ahwaz region and throughout Iran.