Iran: Mullahs judiciary confirms stoning to death of a man and a woman 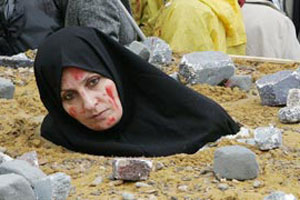 NCRI – The Iranian regime’s highest judiciary authority has confirmed the sentence of stoning to death for a woman and a man, according to reports from inside Iran.

The Supreme Court has communicated the ruling to authorities in the central prison of Tabriz, northwest Iran.

The two prisoners previously had been condemned to stoning in December 2012 inTabriz but following objection by their lawyers  the case had been referred to the mullahs’ Supreme Court.

The two victims have been identified as Zahra pour Saei and Ali Saei. There is the fear that the punishment will be executed secretly.