Iran: Attorney at law on the 1988 massacre: Khomeini was Imam of law or lawlessness? 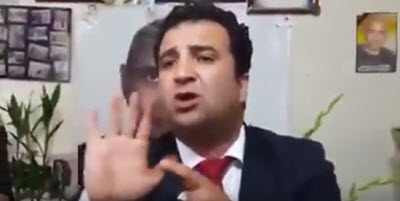 NCRI – According to a video file which has been released on the Internet, during a birthday party held at the home of Sattar Beheshti (a dissident blogger who was killed under torture by the mullahs’ regime on November 2012) in Robat Karim on August 26, Mohammad Najafi, an attorney at law, pointed out and revealed a corner of the lawlessness and crimes taking place by the mullahs’ regime in Iran. The following is the text of the video clip:

Attorney at law Mohammad Najafi: “…Dear friends, I want to briefly point out what has happened in 1988 massacre of political prisoners. The massacre that took place in the summer of 1988 was the foundation of lawlessness. Today, I as a lawyer and as someone who knows the constitution of this country, claim that if Mojahedin (PMOI or MEK) or anybody else such as leftists, anybody who were a member of the groups that should be put on trial in court or were in prison, if they were to be tried for a new crime, we had law at that time, we had constitution. All the counter reactions of the officials in recent days is because they know better than us and are aware that they acted illegally. And who laid this foundation stone? I ask whether Khomeini was Imam of law or Imam of lawlessness.

“We are responsible. Several decades after the revolution, several thousands have been killed. Today, we should speak bluntly. Can’t we question the law of the Islamic Republic?

“The same bad foundation that we laid occurred in the “chain murders” (in the 1990s, at least 120 dissidents, writers and intellectuals were abducted and brutally murdered) No one was held accountable, because since the beginning of the chain murder cases, officials explicitly said that they deserved it. I mean that fatwas were issued by religious leaders that these men deserve death and should be killed. Exactly the same method were used in 1988 massacre and in University alley (killing of the students in the Campus)… and in murders of 2009 uprising and in recent killings when our Kurdish brothers were executed and some people said that legal procedures were not followed.

“We have a simple question. Do you not adhere to your own law, the law that you have approved? And whether I as a lawyer can ask you to act upon your own law?

“I can only wish that one day we get out this atmosphere of terror and bloodshed and this negative mentality with the rule of law.

“I finish my words with two bites of a short poem:
You who answer any question by the iron fist of oppression,
Be tuned and aware that the bloody lips of silence are pregnant with hundred screams.”

Previous article
Iran: Mullah Pour-Mohammadi, Rouhani’s Minister of Justice, admits he is proud of his role in the 1988 massacre of political prisoners
Next article
Renowned lady & radio personality’s letter, whose son was killed by Iran regime agents.