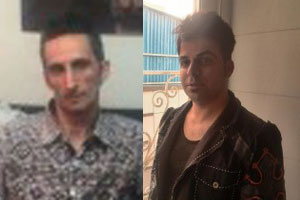 NCRI – Two Christians have been arrested in Iran for playing religious music on a public par, according to reports received from Iran.

Shahram Donia Roui and Mohammad Reza Vahedi were detained by state security forces in Khalij-e Fars park in the city of Fooladshahr in Isfahan province, on November 30.

Donia Roui and MohammadReza Vahedi are both members of a music group.

No information on their fate has been released to their families by the authorities since their arrest.

The fate of fellow Christian church worker Ebrahim Hosseinzadeh, who was arrested by plain-clothes police last week at his home in the city of Shiraz, is also unknown.

The persecution of Christians in Iran in recent weeks is part of wider campaign of repressive measures aimed at preventing any public expression of anger against the regime.

At least 50 prisoners have been executed in Iran in recent weeks, including women and juvenile offenders. Many others have been arrested on charges of ‘prevention of vice and protection of virtue’.