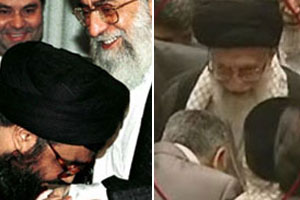 NCRI – A senior commander of the Iranian regime’s Revolutionary Guards admitted the regime’s meddling in Yemen as well as other countries of the region by creating proxy groups.

Brig. Gen. Hossein Salami, Deputy Commander of the IRGC, stated that groups like Hezbollah are no longer in only in Lebanon but today such forces have been formed in Yemen and Syria.

“Until the last few years, we have witnessed only the forces of Hezbollah in Lebanon who could stand up against the West’s bullying; but today, a major force has been formed in Syria and Iraq, as well as the forces of Ansar Allah in Yemen; this shows the potential the Islamic Revolution has to re-take Muslim lands from Western powers,” Hossein Salami said, speaking at a gathering in the city of Ardebil on December 6.

Salami warned that his regime is facing a “complicated” war in which the enemy is fighting in all areas including “economic, political and psychological fields.”

A day after Salami made the remarks, Arabic-language daily Asharq Al-Awsat citing informed sources, reported that shipments of heavy weapons have been delivered to rebels by the Iranian regime in Yemen via the Red Sea.

The report came the same day as a senior Yemeni security official warned other states to respect Yemeni sovereignty.

The Iranian regime’s terrorist Quds force is the main body funding, arming and training the proxy groups in Iraq, Syria, and Yemen as the part of their strategy to create proxy forces in these countries.

The model it uses is Hezbollah in Lebanon, founded by the Iranian regime’s Revolutionary Guards (IRGC) soon after the 1979 Revolution in Iran.

In January 2014, the current Iranian regime’s Foreign Minister Mohammad Javad Zarif laid a wreath on the grave of Imad Mughniyeh, a principal leader and operative that served in Hezbollah’s military for several years.

Imad Mughniyeh was the main man behind the 1983 Beirut bombing of the Marine Barracks in Lebanon.

Brigadier General Hajizadeh, commander of IRGC’s aerospace division, told the regime’s Fars news agency: “The factories that manufacture missiles in Syria are built by Iran and the missiles designed by Iran are being manufactured there.”

Hajizadeh added: “Our first missiles capable of targeting Israel had a range of no more than 1,100km. These were completed in several stages and now we manufacture Sejjil missiles that are multistage-solid-fuel missiles with a range of 2,000km that are now deployed and abundant in our units.”

In Iraq, Asaib Ahl al-Haq, the Badr Organization and Kataib Hezbollah are the three main proxies of the Iranian regime.

The Badr Organization, formed in the 1980s in Iran, headed by Hadi al-Ameri has been running death squads in Iraq and killing Sunni prisoners, according to international human rights organizations.

Kataib Hezbollah is headed by Abu Mahdi al-Mohandes who worked with Iran’s Revolutionary Guard in Kuwait in 1983 organizing terrorist attacks against foreign embassies.

In 2009 the Treasury sanctioned Mohandes for his role in committing and facilitating attacks against U.S. and Iraqi forces.

Asaib Ahl al-Haq, under Khazali, has been involved in kidnapping and killing Sunni civilians and carrying out attacks against U.S. forces.

Asaib al-Haq terror group recently boasted about carrying out 5,000 military attacks against US and coalition forces in Iraq between 2004 and 2001.

They also bragged that 73 per cent of US force casualties in Iraq were the responsibility of their Iraq-based paramilitary organization.