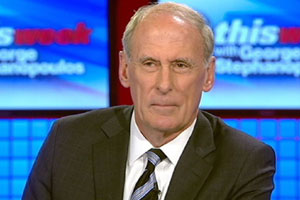 Barack Obama is aiding Iran’s ambitions to build a nuclear bomb by making concessions to the regime in the ongoing nuclear negotiations, US Senator Dan Coats has warned.

The president has ‘no coherent regional strategy’ when dealing with the world’s largest state-sponsor of terrorism, Senator Coats said.

He wrote in the Northwest Indiana Times newspaper: “The Obama administration’s recent announcement that it has yet again extended negotiations with Iran over its illegal nuclear programs is confirmation of another foreign policy failure under this president.

“The Obama administration is guided by no coherent regional strategy. Challenges to vital American interests in this region come directly from Iran, the world’s largest state-sponsor of terrorism.

“Not only is President Barack Obama ignoring the clear and present danger posed by these Iranian ambitions, he is abetting those ambitions by surrendering key positions first and then pursuing negotiations that confirm our weakness.”

The President had abandoned the UN position of eight years that Iran must halt its nuclear program, and made no progress on the core issue of preventing the regime from enriching uranium, he said.

“It is difficult to see how these lengthy negotiations have made any real progress on the core issue. Any negotiated agreement that gives Iran the ability to retain so much enrichment capability is completely unacceptable and should be rejected by Congress.

“The administration has made it clear that it intends to circumvent congressional scrutiny of any deal because of widespread, bipartisan opposition. This would be a serious mistake.

“This is the most significant national security issue of our age, and it is being mishandled to secure a ‘legacy’ for the Obama administration. It is important to reassert a vigorous congressional role before our country is burdened with a bad agreement that does little to prevent a nuclear Iran.

“In the meantime, another extension of the misguided, mishandled negotiations means the Iranians can continue their dangerous nuclear activities, secure additional sanctions relief according to the terms of the interim agreement and buy more time to undermine the international sanctions regime. I am working with my Senate colleagues to break this dangerous cycle.”