Iran: Complaint of a Number of Prisoners to the High Commissioner for Human Rights 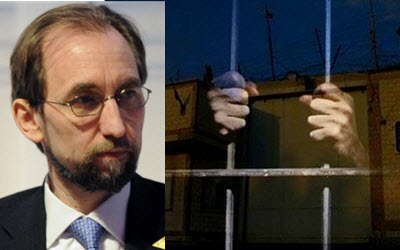 NCRI – A group of prisoners in Gohardasht in a letter to the High Commissioner of Human Rights of the United Nations called for immediate action to prevent heavy noise diffusion on prisoners in this prison.

A statement issued by the prisoners says that increased noise has caused chronic headaches, nausea and unusual dizziness for them and in this regard prison officials told them that it was your fault because you leak news of prison to outside. The text of the statement is as follows:

We are sending you this report while over the past 24 hours, more than 7 of our cellmates have been transferred to the hospital with chronic headaches, nausea and unusual dizziness and even there, except giving few pain killers, nothing else is done.

Prison doctors also know that with making several layered windows and doors and all air vents with sheet metal on the pretext of preventing prisoners’ communications and transfer of news, and installing more than fifteen Static Transmitter and Jammer devices (ie one machine per five square meters), the situation would not be better.

Air pollution resulting from the lack of air circulation and waves and their interferences show evident effects. But prison officials say it is your fault for leaking prison news outside and later, higher authorities would blame us… !!!

From their viewpoints we are guilty and they are allowed to do whatever they want. In addition to the harsh conditions of the past, such as pressure and beatings and interrogations, arbitrary and later solitary confinements and faking files, the two above mentioned cases (blocking air vents and jammers) have recently been intensified a great deal, and no authority considers these issues as followable. Therefore we ask you to take urgent action.