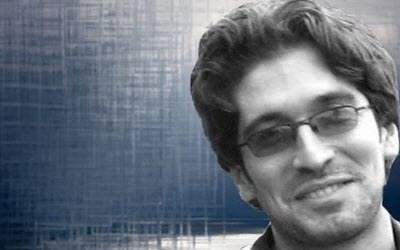 NCRI – While the health condition of political prisoner, Arash Sadeghi deteriorates after 64 days of hunger strike, Iranians launched a Twitter storm in the social media to support him.

On Saturday, December 26, Arash Sadeghi was transferred from Evin prison to Taleghani Hospital in Tehran after his health condition deteriorated due to palpitation, shortness of breath, severe drop in blood pressure, nausea, and coughing up a large amount of blood clots. He has so far lost over 19 kg due to the hunger strike and according to doctors he is in critical health condition and must receive immediate medical care.

It has been over 64 days since this university student and political prisoner staged hunger strike. Mr. Sadeghi, who is sentenced to 19 years imprisonment, staged the hunger strike to protest illegal and unjust arrest of his wife. In a letter, after highlighting violation of his wife’s legal and legitimate rights, Sadeghi wrote: In this unequal battlefield, the only asset I have is my life, and I will stand to the end until I obtain my wife’s rights.”

Mr. Sadeghi’s wife, Golrokh Ebrahimi Iraie, has been sentence to 6 years imprisonment on the charges of “propaganda against the regime” and “insulting sanctities” because of writing a story that was never published, according to Amnesty International.

Meanwhile, a number of other political prisoners in various prisons across Iran are also on hunger strike and in critical health condition, according to reports.

Political prisoner, Morteza Morad-Pur incarcerated in Tabriz prison, for instance, has staged a hunger strike one day after Arash Sadeghi and is demanding implementation of the Article 134 of the Islamic Penal Code which would lead to his release from the prison.

The health condition of Morteza Morad-Pur after 63 days of hunger strike is reported as critical and his family have faced harassment and suppression by the Iranian regime agents and prison officials after they protested mistreatment of this political prisoner and demanded justice.