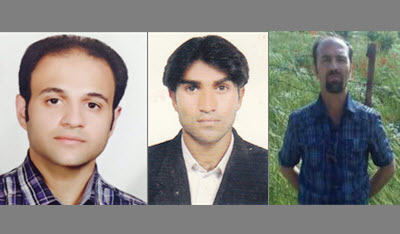 NCRI – According to reports received from inside Iran, on the fifth of September 2016, Evin prison guards prevented political prisoner and supporter of the People’s Mojahedin Organization of Iran (PMOI or MEK) Alireza Golipoor from going to the hospital only because he refused to wear prison uniform.

Some news revealed that it has been over a month since this prisoner’s medical care has been discontinued leading to the deterioration of his current physical condition. The reason for this suspension is his rejection to write a statement of repentance and regret.

Political prisoner Alireza Golipoor was born on the eleventh of April 1986 in Tehran. He was studying PhD in telecommunications, was a senior employee in the Ministry of Communication and Information Technology and also a member of the National Association of Iranian Elite. He was arrested on the second of October 2012 and was detained 4 months without any decision. He was finally sentenced at the beginning of this year to 39 years and 9 months imprisonment in addition to 174 slashes for supporting the People’s Mojahedin Organization of Iran (PMOI or MEK) and also for exposing Iran’s nuclear project and the corruption of government authorities.

Furthermore and against the principle of separation of offenses, political prisoner Behnam Ebrahim Zadeh was transferred to the “Dar-Al-Ghoraan” section after his return, a section where dangerous convicts are incarcerated.

According to another report from Zahedan, prison authorities, and a notorious torturer in particular by the name of Mahmood Sargol Zehi, have increased pressures on political prisoner Vahid Houd.

Prison guards transferred this political prisoner to another section for no particular reason and have placed him with dangerous convicts and drug addicts. Because of the overcrowded cell, he is forced to sleep on the ground and has been deprived to interact with other prisoners.

MOIS’ interrogators forged files and sent them to 3 different branches of the Revolution Court. As a result, this political prisoner was given a total sentence of 35 years and 6 months in addition to a 50 million Toman fine.

Another report describes that in another appalling policy coordinated by the Iranian regime against political prisoners and to prepare the ground for their oppression, prisoners of section 8 of hall 10 in Evin prison attacked political prisoner Behnam Moussivand on September fifth and injured his head.

Previous articleJoseph Lieberman: Remember Iran’s Role in 9/11
Next articleIran: violent attacks of the security forces to section 5 of Central Prison in Karaj, and the transfer of 6 prisoners to the solitary confinement