Iran: Five Years of Imprisonment for an Activist Teacher for Bogus Security Charges 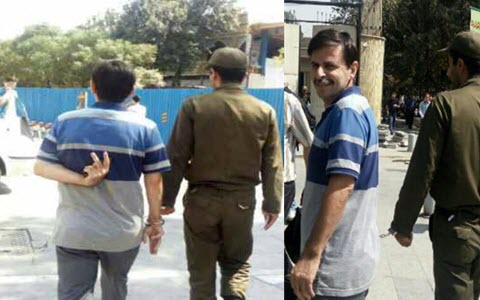 NCRI – According to the state-run IRNA News, the Spokesman of the Judicial System of Iran in a news conference on Sunday, September 17 responded to a question about the arrest of the teacher activist, Mahmoud Beheshti. Gholam-Hossein Mohseni-Eje’I claimed that people will not be arrested because of their union or religious activities in Iran. He added, “No one gets arrested due to his occupation or religion. It does not make sense to say that the person is arrested because he is of Bahai’ faith, a teacher or a journalist.”

The Spokesman of the Judiciary also announced that Mahmoud Beheshti is sentenced to 5 years of imprisonment for security offenses and the verdict has been finalized. Mohseni-Eje’I utters such remarks while thousands of people from different ethnic and religious groups, as well as the teachers and journalists, are being imprisoned and executed. The regime’s authorities call the activities of union and political activists and the journalists as “security offenses.”

The Spokesman of the Teachers’ union, Mahmoud Beheshti was arrested in his home on Tuesday, September 12. The agents of the Prosecutor’s office called the union activist on Monday, August 28, 2017, asking him to report himself to the prosecutor’s office. Mahmoud Beheshti called their warrant as illegal announcing that he will not return to the prison.

According to the reports, Mahmoud Beheshti refuses to meet his family as he was forced to wear prison’s uniform during visitations. The Teachers’ Association of Tehran Province expressed concern over the arrest of Mahmoud Beheshti, calling for the unconditional release of all teachers imprisoned or on exile.

It is noteworthy that Mahmoud Beheshti has recently written a letter stating that,” 14 years of imprisonment for the legal union and civil activities?! I will continue my way with calmness and confidence. I put the blame on the three powers of the country if anything happens to me.”