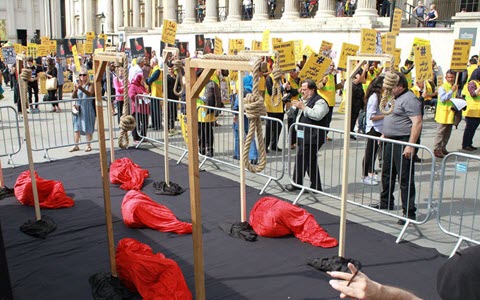 NCRI – American politician Ken Blackwell has written an op-ed for The Patriot Post, entitled Human Rights are the Key to Confronting Iran, in which he notes that change on US policy towards Iran is “imperative”.

Blackwell writes that the 2015 nuclear agreement has provided far too many concessions to the Iranian Regime and has failed to achieve its objective of preventing the Regime from obtaining nuclear weapons.

He wrote: “Tehran’s nuclear program continues and its military sites remain off-limits to inspectors. But more than that, the Obama administration’s agreement has resulted in more egregious conduct by the ayatollahs, in terms of sponsoring terror and Islamic extremism, cooperating with North Korea in pursuit of ballistic missiles, and cracking down on domestic dissent.”

This new, yet to be announced, the policy will douse the Iran Regime’s wildfire across the middle east by imposing further sanctions on their interference in Syria and Iraq, and their ballistic missile tests.

Most importantly, it will focus on human rights and the Regime’s consistent abuse of them.

The U.S. Ambassador to the United Nations, Nikki Haley, recently said: “Now more than ever, human rights matters. We say all the time if the government does not take care of its people, bad things will happen.”

Nowhere is that truer than in Iran, a country with the highest per capita rate of executions in the world, that has executed at least four children this year and has 89 more on death row. A country where 30,000 political prisoners, mostly members of the main Iranian opposition movement, the People’s Mojahedin Organization of Iran (PMOI/MEK), were slaughtered in a massacre for which no one has seen justice.

Blackwell wrote: “The ayatollahs enforced a conspiracy of silence on the 1988 massacre for nearly 30 years. But in August 2016, an audio recording was released of a meeting held in 1988 with Khomeini’s heir-apparent at the time, Hossein Ali Montazeri, who lambasted the officials responsible for the massacre, condemning the incident as ‘the worst crime of the Islamic Republic’…The 1988 massacre is the hallmark of the Iranian regime’s dreadful human rights abuses and none of the regime’ factions can or want to distance themselves from this crime.”

This issue was raised by Asma Jahangir, the UN Special Rapporteur on the situation of human rights in Iran, in her report to António Guterres, the UN Secretary-General, in September.

She said: “Overwhelming evidence shows that thousands of persons were summarily killed. Recently, these killings have been acknowledged by some at the highest levels of the State.”

That is why there must be an international investigation into the massacre and why the US should place human rights at the centre of their policy on Iran.

Blackwell wrote: “This fall’s UN General Assembly will see a new censure resolution on Tehran’s human rights abuses, and this is the best place to start demanding such an investigation. Doing so will send a very strong and unmistakable signal to the Iranians at home and abroad that the US has adopted a new policy that is morally oriented and stands on their side. It will also demonstrate to the regime’s top officials that the era of impunity is over. It will place the US on the moral high ground in dealing with its European partners when it comes to Iran policy.”

Previous articleIran: Five Years of Imprisonment for an Activist Teacher for Bogus Security Charges
Next articlePresident Trump: ‘Iran’s People Are What Their Leaders Fear the Most’