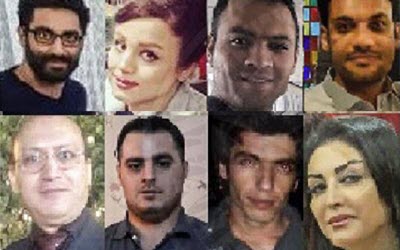 In total 11 Christians were arrested during the raid on their congregation last Friday, August 12. The raid was carried out by armed plain clothes intelligence agents, according to eye-witnesses.

Ten of those arrested have been identified as Amin Ahanin, Mohammad Alyasi, Fatemeh Amini, Edmund Khachaturian, Mohammad Malek Khatai, Mohsen Khoobyari, Arash Qodsi, Hamed Sepidkar, Samaneh Shahbazi-Far and Maryam Zonubi. An eleventh person arrested at the mass has not yet been identified.

They were taken away in vans by security agents armed with pistols and carrying walkie-talkies.

Books and other Christian literature were confiscated from the in-house church.

There is no information about the current status of the detainees.

The mullahs’ regime has stepped up its suppression of Iran’s minority Christian population.

The regime arrested a number of Iranian Christians on Christmas Day last year at an in-house church in the city of Shiraz, southern Iran.

The group of Iranian Christians had gathered together on December 25 to celebrate Christmas when plain-clothes agents of the Iranian regime’s notorious Ministry of Intelligence and Security (MOIS) raided the in-house church.

Armed MOIS agents ransacked much of the place and confiscated personal items and satellite dishes, according to eye-witness reports, which also said that the agents behaved ‘offensively’ towards those detained.

Last month, in the run-up the Iranian Resistance’s annual “Free Iran” rally in Paris, nearly 80 church leaders from the United Kingdom and United States signed a declaration expressing deep concern over the suppression of Christians in Iran and urging Western governments to condition any improvement of relations with the Iranian regime to an improvement of the human rights situation including the situation of Christians in Iran.

The Bishops, including John Pritchard, former Bishop of Oxford; the Bishop of Stepney, Adrian Newman; the Bishop of Selby, John Thomson; and Rachel Treweek, the Bishop of Gloucester who is the Church of England’s first diocesan bishop, and priests reiterated that the suppression of Christians in Iran has increased during Hassan Rouhani’s tenure.