Iran regime hangs three in prison; man set to be hanged in public on Monday 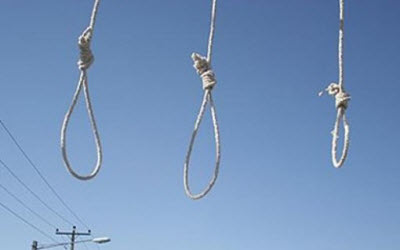 NCRI – Iran’s fundamentalist regime on Saturday hanged three prisoners in a jail in northern Iran. The regime is set to hang a man in public on Monday.

In a statement on Saturday, the regime’s judiciary in Gilan Province, northern Iran, announced that the three prisoners were hanged in the presence of judicial officials in the Central Prison of Rasht. They were identified only by their initials and ages: F. B., 40; A. M., 32; and H. D., 31.

An unidentified prisoner will be hanged in public in the town of Songhor, western Iran, at dawn on Monday, state media reported.
The public execution will take place at the former site of the oil stocks, next to the town’s power terminal, the state-run Soheil-e Songhor website reported on Sunday.

The mullahs’ regime hanged another nine prisoners on Wednesday in the city of Karaj, north-west of Tehran.

The regime hanged 18 prisoners last weekend, including two cases in public. A woman was among those hanged on July 17.

The regime hanged nine prisoners collectively on July 13 in Gohardasht Prison in Karaj.