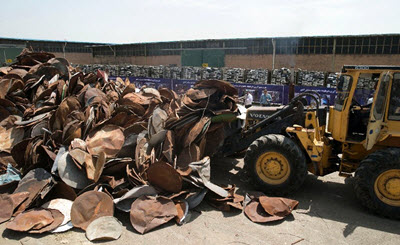 NCRI – The Iranian regime destroyed 100,000 satellite dishes and receivers on Sunday as part of a widespread crackdown against the banned devices, state media reported.

The destruction ceremony took place in Tehran in the presence of General Mohammad Reza Naghdi, head of the Iranian regime’s Basij militia, who warned of the impact that satellite television was having in society.

“The truth is that most satellite channels… deviate the society’s morality and culture,” he said at the event according to Basij News.

“What these televisions really achieve is increased divorce, addiction and insecurity in society.”

Under the Iranian regime’s fundamentalist laws, satellite equipment is banned and those who distribute, use, or repair them can be fined up to $2,800 (2,500 euros).

“Reforming this law is very necessary as using satellite is strictly prohibited, but most people use it,” Jannati said.

“This means that 70 percent of Iranians violate the law” by owning satellite dishes, he added, according to AFP.

Naghdi said on Sunday: “Most of these satellite channels not only weaken the foundation of families but also cause disruptions in children’s education and children who are under the influence of satellite have improper behaviour.”

The regime has been working hard to block Iranians’ access to satellite television stations by jamming signals. It aims to prevent the Iranian people from becoming privy to its egregious and nefarious conduct inside and outside of Iran or to be informed of anti-government protest, strikes and other activities by the Iranian Resistance.

Despite regular crackdowns on satellite viewers, producers and distributors, regime officials have admitted that increasing numbers of Iranians are watching satellite television channels in Iran.

The head of cultural affairs in the regime’s Islamic Revolutionary Guards Corps (IRGC) said on January 29, 2015 that over 60 percent of Iranians watch satellite television channels.

Senior officials of the regime have admitted that 40 percent of Iranian families have access to major opposition satellite channel Simaye Azadi.

Operating from Europe, prominent non-profit 24/7 Iranian opposition channel Simaye Azadi, or ‘Iran National Television’ (INTV), broadcasts news and information to Iranians around the world via satellite and the internet.

The regime has stepped up internet censorship, blocking around five million websites dedicated to arts, social issues and news and filtering the contents of blogs and social media. It also tracks down and arrests many online activists inside Iran. Many have therefore turned to INTV as a means of obtaining real information without being traced.

INTV has played a unique role in breaking the mullahs’ censorship and providing the Iranian people with uncensored news and flow of information.

It is banned in Iran for reports that expose the violation of human rights perpetuated by the mullahs and for raising awareness among millions of Iranians of the regime’s fundamentalism, suppression of ethnic minorities, meddling in the affairs of other countries, and particularly about their support for terrorism in Syria, Iraq and elsewhere in the region.

INTV provides constant news, breaking news, talk shows, live question and answer sessions, art and cultural programs, special programs for the youth and women, and political satire to millions of Iranians all across Iran who tune in to watch with their satellite dishes. The Iranian regime’s officials on scores of occasions have warned against the growing popularity of this channel.

INTV relies heavily on volunteer work of Iranians all over the world and provides for its expenses solely through donations of Iranians inside and outside of Iran as well as citizens of other countries who support the cause of human rights and freedom in Iran.

Gholamreza Khosravi, an activist of the People’s Mojahedin Organization of Iran, PMOI (Mujahedin-e Khalq, MEK), was executed in Iran on June 1, 2014, on the charge of ‘enmity against God’ for collecting information and giving monetary assistance to the Sima-ye Azadi station.