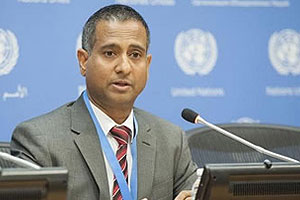 Iran’s regime could be on track to execute more than 1,000 people this year, a U.N. investigator said on Monday.

U.N. special rapporteur on Iran, Ahmed Shaheed, suggested that human rights violators in Iran should be named and shamed and targeted with sanctions such as a travel ban.

Shaheed said “there have been rising executions” in Iran and that women are still treated as second-class citizens, Reuters reported.

He also criticized Tehran for jailing some 40 journalists during the year for vague charges.

U.N. Secretary-General Ban Ki-moon said in a report in August that promises by the Iranian regime’s President Hassan Rouhani of greater freedoms for the country have not resulted in any major improvements in human rights and freedom of expression.

Shaheed is due to brief a General Assembly human rights committee this week.