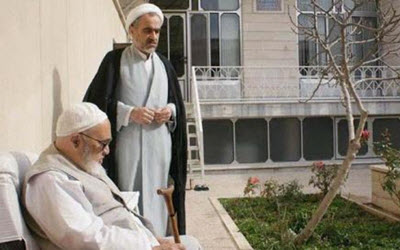 NCRI – Today November 27, late Ayatollah Montazeri’s son Ahmad Montazeri was sentenced to imprisonment and defrocking, according to an announcement by the Montazeri’s official website.

Due to publishing his father’s audio files on the 1988 massacre of political prisoners in Iran, on charges of “acting against national security and propaganda against the publication of secret documents” Ahmad Montazeri has been sentenced to 21 years in prison and defrocking by the Special Clerical Court.

According to same source, at least six years of imprisonment will be acted upon him.

Ahmad Montazeri also has been condemned by mullahs’ judiciary to be defrocked, but because of being in the family of a martyr, defrocking will be suspended for three years.

The verdict may be appealed to the Special Court of Clergies.

NCRI – Iran: Trial of Ahmad Montazeri without a lawyer in the Special Clerical Court on charges of “acting against national security”

According to reports, Ahmad Montazeri, son of Ayatollah Hossein-Ali Montazeri (former Deputy Supreme Leader and Khomeini’s nominated successor at the time) was tried in the Special Court for Clerics (SCC) in Qom on Wednesday, October 19, for publishing an audio file of his father’s meeting with the “Death Commission” responsible for the massacre of 30,000 political prisoners in 1988 in Iran.

Montazeri’s family announced the news on their Telegram channel, adding that the court session was held “behind closed doors without the presence of a defense lawyer and jury.” The statement said that Ahmad Montazeri was accused of “acting against national security” and the charges were read out by Ansari-Zadeh, representative of the prosecutor.

Ahmad Montazeri has denied the charges but “on the request of the relevant authorities, it has been decided not to publish the content of the meeting until the court’s verdict is announced,” Ayatollah Montazeri’s family added.

The court started at 9:00 a.m. and ended at around 13:00 in the afternoon. The Special Court for Clerics does not exist in the constitution of the Islamic Republic but the Court has been handling the cases of allegation and offenses committed by this stratum for years. The Court is accountable only to the Supreme Leader.

On August 2016, Ayatollah Montazeri’s official website published an audio file of this late Ayatollah’s meeting with the member of “Death Commission” including Hossein-Ali Nayeri, Morteza Eshraghi, Ebrahim Raeisi and Mostafa Pour-Mohammadi (current Justice Minister in Rouhani’s administration) who oversaw and approved all the executions during the 1988 massacre of political prisoners after a fatwa by the regime’s then Supreme Leader Ayatollah Khomeini. In this meeting, Ayatollah Montazeri describes the mass execution of political prisoners as “the greatest crime committed during the reign of the Islamic Republic” and tells them that they would be remembered in the future as criminals.

The release of the audio file was met with widespread reactions in Iran and outside the country. Most officials and figures of the Islamic Republic from both the hardline and the reformist factions, who took a stance on this issue, defended Khomeini’s decision for the mass execution of prisoners in 1988. However, figures like Ali Motahari demanded an apology from the perpetrators of the crime.

The People’s Mojahedin Organization of Iran (PMOI or MEK), whose members and supporters make up most of those executed in that year, once again called for justice and the trial of the leaders of the Islamic Republic on charges of “crimes against humanity.”

In addition, 100 Iranian civil society figures, academics and human rights activists living abroad in a letter to the UN Human Rights Council and the International Criminal Court urged these institutions to recognize the 1988 massacre of political prisoners as “crime against humanity.”
During the mass execution of political prisoners in the summer of 1988 in Iran, several thousand members and supporters of the PMOI and some other opposition groups were executed by the Iranian regime within a few months.

Previous articleParis Conference: Call for Justice; Ending Impunity for Perpetrators of Crimes Against Humanity in Iran, Syria
Next articleIran: An Outlook for Freedom