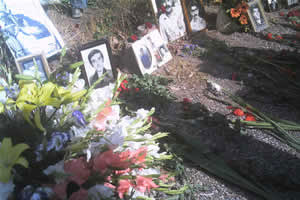 NCRI – Iran’s fundamentalist regime has prevented the families of executed political prisoners from commemorating the death of their loved ones on the 27th anniversary of their massacre.

Some 30,000 political prisoners, primarily affiliated to the main democratic opposition People’s Mojahedin Organization of Iran, PMOI (Mujahedin-e Khalq, MEK), were executed in the summer of 1988.

On Friday (August 28) relatives of the 30,000 martyrs and other ordinary Iranians attempted to gather at the Khavaran Cemetery near Tehran to remember their loved ones.

The regime’s suppressive forces however prevented the entry of those who had intended to gather.

August marks the 27th anniversary of the brutal prison massacre in Iran. In the summer of 1988, one month after Ruhollah Khomeini was forced to accept a cease-fire in his eight-year war with Iraq, the fundamentalist ruler of the mullahs’ regime ordered a mass execution of all political prisoners affiliated with the main opposition group PMOI (MEK).