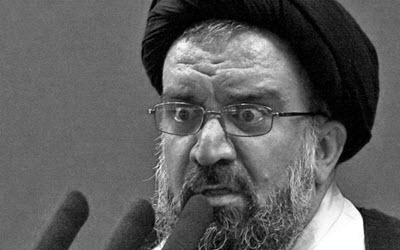 Ahmad Khatami, the Iranian regime’s Friday prayers leader, in Tehran and vice president of the Assembly of Experts, spoke Friday, August 19, 2016, about the shocking revelations of the deceased Hossein-Ali Montazeri (the hand-picked successor to Ruhollah Khomeini, the founder of the clerical regime,), which was made public on August 9.

Ahmad Khatami reacted to the publication of an audio file that surfaced this month — posted on a website maintained by supporters of Hossein Ali Montazeri revealing the confidential meeting between Montazeri and members of the “death commission” in charge of implementing a fatwa by Khomeini to massacre the prisoners.

The task of “death commission” was to liquidate in three months all political prisoners who were defending their beliefs beginning with the activists of the People’s Mojahedin Organization of Iran (PMOI or MEK).

Referring in his sermon to the comments made in the record concerning the People’s Mojahedin of Iran (PMOI), mullah Khatami who is close to the regime’s Supreme Leader, said, “It seems that lately the world is against us, a new agenda, which is to revive PMOI.

Justifying the massacre of political prisoners in 1988, Mullah Khatami said “the conduct of the prisoners had changed … maybe was it collusion with mohareb (those waging war against God)? The prisoners said they would remain firm on their positions. They were also considered enemies of God.”

The secretary of the Assembly of Experts added: “What the Imam (Khomeini) did in ordering the executions in 1988 (the massacre of political prisoners) was a Quranic job, legal, revolutionary and a great service to the Muslim nation of Iran.”

Khatami added: “I thef Imam had not made this great service to the Iranian nation, then today we would face serious problems. There would be no security. Today we owe our security to the Imam Khomeini.”

The audio file of Montazeri which was posted on the internet by his son has sent shockwaves in Iran. The Ministry of Intelligence and Security (MOIS) has called Montazeri’s son and ordered him to withdraw the file from website.

In this recording, Montazeri described the massacre of political prisoners in 1988 as “the greatest crime” committed by the regime in Iran.

According to Afshin Alavi, a member of the Foreign affairs Committee of the National Council of Resistance of Iran (NCRI), “the words of one of the most senior officials of the regime in the official ceremony of Friday prayers in Tehran is a clear recognition of the most terrible massacre perpetrated by the mullahs’ regime. Khatami who- as Friday prayers leader – is representing the whole regime on this platform, confesses that the massacre was the means of survival for the regime.”

Afshin Alavi called on governments and human rights organizations to “strongly condemn the criminal remarks.” He reiterated the call of the Iranian Resistance in international forums to “bring to justice all those officials of the current regime, implicated in the massacre of political prisoners.

Afshin Alavi states that the massacre is ongoing, since the executions of political prisoners in Iran is continuing with impunity. Today the weakened regime is unsuccessfully finds the executions and the justification for these crimes, the only way of survival.”

Previous articleMETRO: Here’s what it’s like to be a political prisoner in Iran
Next articleGroup affiliated to Iran regime plots assassination of Saudi envoy to Iraq