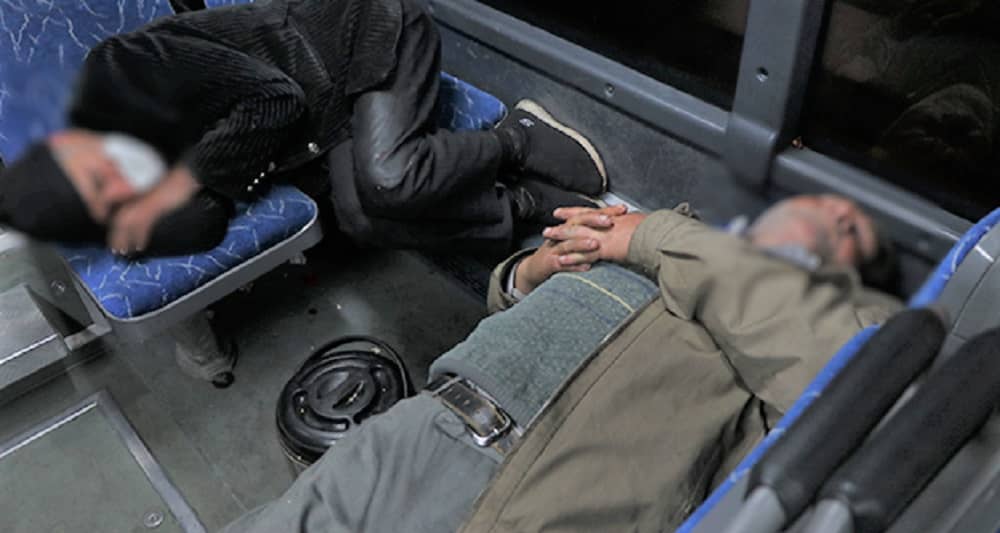 “They have to change the bus every 45 minutes. This is how they spend their nights, sleeping on buses while enduring sub-zero temperatures,” Iran’s state media reported on December 29, acknowledging the tragedy of people sleeping on buses.

The citizenry’s increasing poverty has left Iranians with no choice but to take extreme measures to survive. This includes grave-dwellers and trash collectors, people renting rooftops, slum-dwellers, women living in holes and canals, and now people sleeping in public transportation buses(BRT).

“Sleeping on BRTs is their only choice, and a seat on the bus is their cheap castle in the capital. But this cheap house costs them between 3.5 to 7.5 million rials (20-30 USD) per month. They are employed, but their menial jobs prevent them from renting a room,” wrote the state-run Tejarat news on December 29.

“It’s 23:45 [local time], and the temperature is three degrees Celsius. They come to the bus station one by one: old, young, and even children. Tehran BRT hosts them every night. One takes refuge on the bus at midnight and the other at 1:00 am. Their timing depends on the cold weather,” Tejarat News adds.

“Taking a long journey is a smart choice for those sleeping on buses. Therefore, two bus lines are their houses: Azadi Square to Tehranpars and Tajrish to Rah-Ahan.”

“These people are not drug addicts. One of the passengers has neat clothes, and the other is wearing nice pants. They don’t want to talk. They only want to sleep.”

A bus driver tells Tejarat News reporter, “They work during the day across the city and sleep here at night.”

However, they can’t have sweet dreams or a cozy night. Every 45 minutes, they must get off the bus.

“I don’t want to force them to get off the bus. But my boss told me that if I keep even one person at the end of the line, he will fire me,” the driver says.
These passengers pay between 15,000 to 24,000 rials (7-10 USD) every night. “[This is] the cheapest fare for a brief stay at a warm shelter, in long and cold winter nights,” Tejarat News described.

“Reports indicate that 60 to 70% of the income of urban households is spent on housing. Expensive housing has driven many to the outskirts of the city in the some can’t even afford a place in slums,” Tejarat News adds. 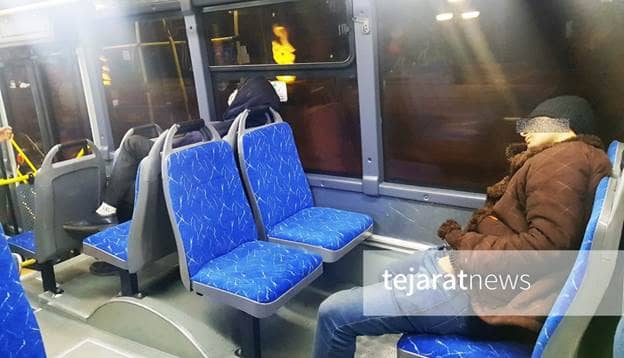 Ismail Hosseinzehi, deputy chairman of the parliament’s civil commission, said, “When we read that in that last year alone, the number of people living in absolute poverty has increased to 30 million, we realize the horrible dimension of increasing poverty in Iran,” the state-run Etemad daily wrote on December 26, referring to Iran’s increasing poverty. The staggering number counts for over 35 percent of country’s 84 million habitants.

This dire situation, coupled with the Covid-19 pandemic, high housing prices, worsened by the regime’s ineptitude, mismanagement, and corruption, has resulted in the emergence of various social tragedies in recent years.

In a 2020 interview with the state-run Etemadonline website, Mohammad Reza Mahboubfar, an Iranian sociologist, said: “Some women heads of households have no shelter and are forced to live in ruins, destroyed buildings, shantytowns, tents, underground holes, and canals. Female slum-dwellers do not have appropriate housing.”

“Previously, the number of slum-dwellers was said to be around 25 million, but today it has risen to 38 million. We can surely say that slum dwellers in Tehran have increased by 60%.,” he added.
In addition, reports in 2020 indicated that many people sleep on rooftops as they cannot afford to rent a house or even a room.

Iran’s announced poverty line is around 120 million rials. Thus, many Iranians fall under the poverty line due to their low salaries. Iranian teachers receive nearly 60 million rials, and workers’ salary base is around 25 million rials (91 USD). As such, they can hardly make ends meet, let alone have proper shelter.
Poverty is not a crime. But the ones causing it are certainly criminals. The criminal mullahs’ regime should be blamed for the extreme poverty, like any other problems in the country.

People sell their body parts, women and girls sell their hair, and others sleep on buses while the country sits on an ocean of oil and gas.

Contrary to the narrative parroted by the pro-engagement crowd, sanctions are not the reason behind the current crises in Iran. The regime’s policies are to blame. The mullahs squander billions of dollars on their clandestine nuclear and missile program and on funding their terrorist proxy groups.

In its 2022-2023 budget plan, the government of Ebrahim Raisi has increased the budget of terrorist entities like the Revolutionary Guards (IRGC) and ignored the plight of Iranians. The IRGC’s budget has increased by 58% while the salary of ordinary Iranian employees has increased by only 10 percent, still keeping them below the poverty line.

Even if one were to assume that that sanctions are the real cause of Iran’s economic woes, the regime could immediately end them by stopping its malign activities such as terrorism and human rights violations. But it is it either willing nor capable of doing so because the survival of Iran’s ruling theocracy depends on them.