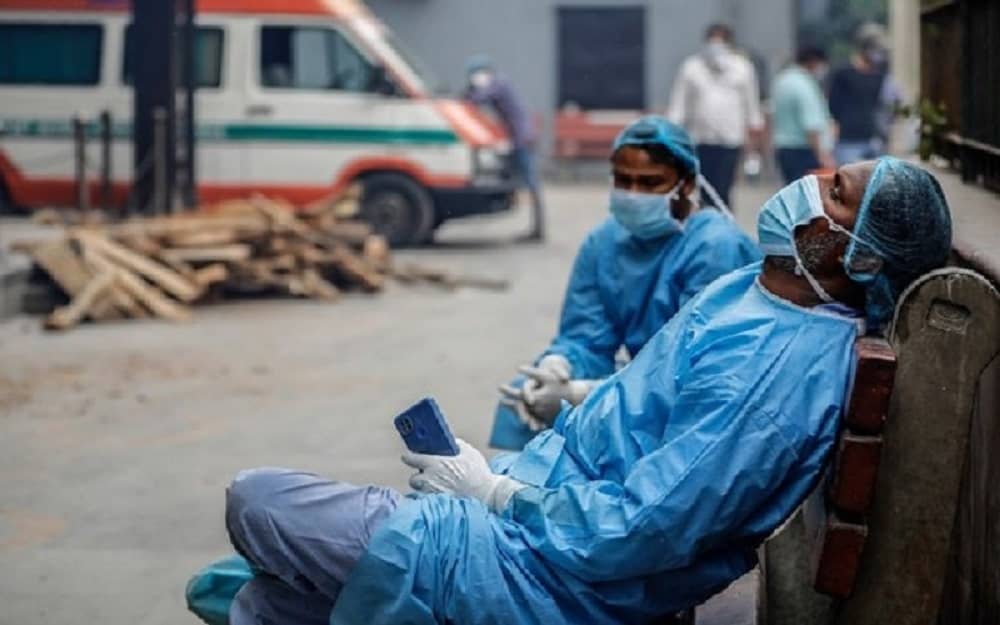 Iran’s Covid-19 crisis is worsening. The regime’s Health Ministry announced the mullahs’ engineered Covid-19 statistics on Sunday as 542 deaths, which is a new pandemic record. Meanwhile, over 352,600 people have died due to the novel Covid-19 crisis, according to the Iranian opposition.

The situation has reached a point that regime officials and state media acknowledge the severity of the Covid-19 crisis, and according to the state-run Arman daily on Sunday, “The shadow of death surrounds the people and the country.” “The Covid-19 situation in Iran is worse than the announced statistics,” Arman daily adds.

More than 352,600 people have died of the novel #coronavirus in 547 cities checkered across all of Iran's 31 provinces, according to the Iranian opposition PMOI/MEK.

“A large number of people have contracted the virus that goes unchecked, and in other words, the number of cases is more than what we are reporting,” said a senior health expert on Sunday, according to the semi-official ISNA news agency.

Videos from Iran show heart-wrenching scenes from hospitals being full and patients and their families suffering. A video on social media showed a grieving mother who had recently lost his young son saying: “My boy died. I watched him suffer because there was no oxygen. I went to every room in the hospital and asked for oxygen. No one answered me.”

In Babol, northern Iran, people should inject iv-fluids in cars, if they find any. The regime refuses to help medical professionals. Many of the selfless Iranian nurses and doctors have lost their lives helping people, yet the regime refuses to financially back them or provide hospitals with the necessary equipment.

Iran’s health system is collapsing. “With the consecutive Covid-19 waves, the infrastructure of the country’s health system has reached the collapsing point,” wrote the state-run Mostaghel daily on Sunday, August 8, 2021.

Iran’s Covid-19 crisis deepens due to the regime’s inhumane Covid-19 policy, and this fact is now being confirmed and acknowledged by state media and officials.

“The relevant officials ignored this devastating [virus] by denying its existence. Officials ignored the advice of doctors and health professionals. In the very first months, officials promised the people they would defeat Covid-19. By calling the virus weak, they encouraged people to not wear masks,” Mostaghel daily adds.

August 8 – Mashhad, northeast #Iran
A hospital waiting room
The delta variant is infecting thousands as regime Supreme Leader Ali Khamenei banned credible vaccines and only a small fraction of the elderly have been vaccinated.#COVID19 pic.twitter.com/xvY01qN3ZK

The regime initiated its inhumane Covid-19 policy to control Iran’s restive society, following the major November 2019 uprising with calls for regime change. The authorities refused to announce the existence of the virus in Iran so they could have a large election turnout during the sham parliamentary elections. While most Iranians boycotted the regime’s sham elections, those few supporters of the regime became the host of the virus, and soon Covid-19 encompassed the entire country.

“After their political exploits several thousand deaths, infected and hospitalized, we are losing a war that we did not start at all,” Mostaghel daily added.

“The super-critical state of coronavirus in Iranian hospitals has sounded the alarm for mass deaths of patients. Hospital corridors are filled with beds, and patients are even admitted to chairs and on the floor. Many new patients are in urgent need of hospitalization in the ICU. Still, there is not even a simple bed in the tents set up on the hospital grounds, which is why young patients die,” Arman daily wrote on Sunday, quoting Mohammadreza Mahboubfar, one of the regime’s health officials.

“These conditions have also saturated the capacity of cemeteries in several cities. ‘Wandering dead’ is a new phenomenon in the country these days. In Kerman, the mountaineering route has become the burial place of a large number of coronavirus victims,” Arman daily adds.

In recent days, while the number of the Covid-19 death toll rapidly rises, some of the government officials blatantly claimed they had passed the “crisis.”

“While these days all hospitals across the country are filled with patients, and there are no empty beds for infected people, and they are admitted in hospital’s yard or parking lot, and hundreds lose their lives every day, how could we speak of passing the crisis,” Mostaghel daily wrote in this regard.

“The main culprits of this abnormal and miserable situation are the officials who have created this situation through ignorance and mismanagement. From the beginning of the pandemic, they did not understand the sensitivity of the issue and covered up the disease with despicable intentions,” Mostaghel daily acknowledged.

During the beginning of this pandemic, the regime’s Supreme Leader, Ali Khamenei, explicitly said that he intends to turn the Covid-19 “test” into a “blessing” for his regime. With the systematic cover-up of the outbreak, inaction, and then banning credible Covid-19 vaccines, Khamenei showed the blessing he meant was nothing but prolonging his regime’s life and avoid protests.

Khamenei is responsible for the “An unprecedented massacre” in Iran, as described by Arman daily.

The tragedy of Iran coronavirus outbreak is not too big: Ali Khamenei, the regime's supreme leader

The recent protests in Khuzestan and dozen other cities showed the regime’s inhumane Covid-19 policy would no longer work as a barrier against people’s uprising.

“We are all in danger. The worrying economic pressure, along with the high number of Covid-19 deaths, and the inefficiency of decision-making institutions, will eventually bring the distressed people to a point where they will have nothing to lose. This is a dangerous process that has been warned about before,” the Mostaghel daily warned regime officials on Saturday, August 7.

Previous articleIran: Raisi Appoints Head Of The Plundering Cartel, EIKO As 1st Vice-president, And A Henchman As His Chief Of Staff
Next articleIran: Coronavirus death toll exceeds 354,100