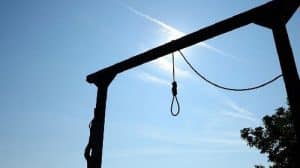 Iran under the clerical regime has long maintained its status as the country with the highest annual rate of executions per capita. In terms of raw numbers, only China with its population of over one billion carries out more state-sanctioned killings each year. Iran is also one of only a few countries in the world to routinely issue death sentences for persons who were under the age of 18 at the time of their alleged crimes. This practice is unequivocally banned under international law, as is the use of the death penalty.

Regardless of the Iranian regime’s account of the total execution, the fact remains that officials are quite willing to openly acknowledge the practice, thereby signaling their rejection of international human rights standards.

It is worth noting the well-recognized phenomenon of the regime’s security forces securing confessions under torture.

In some cases, the regime authorities use murder charges as a pretense for politically motivated executions. This was evidently the case with Navid Afkari, a widely admired champion wrestler who was accused of killing a security guard during anti-regime protests and was executed in September 2020 despite an international campaign to save his life. It was later revealed that surveillance footage existed which appeared to prove his innocence, underlining that he was indeed executed for participating in protests.

Afkari’s execution took place under the tenure of Ebrahim Raisi as head of the judiciary. Raisi had also overseen key aspects of the crackdown on nationwide protests in November 2019, which saw 1,500 protesters killed and countless others tortured. Earlier this year, Raisi was selected as the regime’s new president, sparking new protests over his role in the crackdown as well as his longstanding legacy as a violator of human rights and one of the regime’s foremost advocates for capital punishment, other forms of corporal punishment, and the violent suppression of dissent.

In the summer of 1988, Raisi became one of four officials to sit on the Tehran “death commission” that implementation of a fatwa from the regime’s Supreme Leader Ruhollah Khomeini which primarily targeted the Mujahedin-e Khalq (MEK) supporters. For roughly three months, Raisi oversaw the interrogation and summary execution of anyone believed to still harbor sympathy for the MEK. It is estimated that at the end of that period, over 30,000 political prisoners lay dead.

Raisi is only the latest in a series of participants in that massacre who have been rewarded with positions of substantial influence in the Iranian government and society. Of course, as the regime’s current president, he is now the foremost example and the person with the most power to revive the legacy of the 1988 massacre in current circumstances. His crackdown on dissent in 2019 and the ongoing acceleration of Iran’s execution rate both suggest that this process is well underway, and this in turn fuels calls for the international community to take meaningful action in support of human rights.

On Monday, Iranian expatriate activists held the latest in a series of rallies in Stockholm to bring greater attention to the 1988 massacre and the longstanding lack of accountability for its perpetrators. The event coincided with the 30th session of the Swedish criminal court’s trial of Hamid Noury, a former Iranian prison official who was arrested based on the principle of universal jurisdiction in 2019, and later arraigned on charges of war crimes and mass murder stemming from his role in the massacre.

The same principle could be applied to Ebrahim Raisi, who should be barred from traveling to any Western nation, or else arrested after he does so. Earlier in October, former Member of the European Parliament Struan Stevenson issued a formal request for this arrest to Police Scotland when it appeared as if Raisi might travel to Glasgow for the COP26 climate change conference.