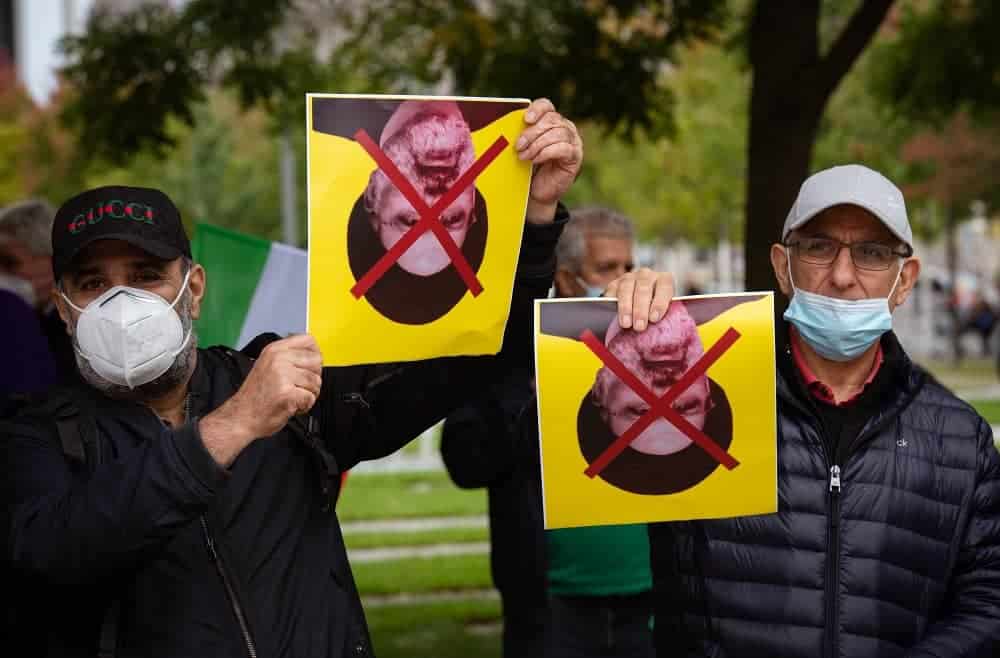 On October 8th the Times reported, that “Human rights campaigners, victims, and relatives of those who have been tortured and executed by the Iranian regime have called on Police Scotland to investigate Raisi under the legal concept of universal jurisdiction. It means that human rights violators of any nationality can be charged in any country, regardless of where the crimes were committed.”

This formal request has been made by Mr. Struan Stevenson, a former MEP. In an article in UPI on July 14, 2021, Mr. Stevenson underlined that the “U.K. government, which is hosting the summit, and the Scottish government, must ban Raisi’s entry to the United Kingdom.”

Mr. Stevenson also reminded that Raisi “is the pariah president of a pariah state and should be treated as such. When Adolph Hitler’s deputy, Rudolf Hess, flew to Scotland in 1941, he was immediately arrested and spent the rest of his life in prison.”

While criticizing the European governments’ appeasement policy toward the regime Mr. Stevenson highlighted in his article that “the time has come for the United Nations, the United States and the EU to end appeasement of this vicious regime and to discard all attempts to resurrect the nuclear deal.”

But as calls for prosecuting Raisi amplifies due to his role in the 1988 massacre of political prisoners, Western policymakers and international news sources remain focused on Vienna talks with the aim of restoring the 2015 Iran nuclear deal. Sadly, this focus tends toward the same sort of naivety and conciliation that defined Western dealings with the Iranian regime.

Meanwhile, the issue of Iran’s domestic violations of human rights lingered as a mere footnote in the international dialogue, even as crackdowns on dissent at the end of 2017 and the beginning of 2018 were dwarfed by the mass killing and systematic torture of protesters from November 2019 onward. In January 2018, the regime was faced with a nationwide uprising that grew out of economic protests but adopted slogans in support of regime change as it spread to well over 100 cities and towns. Several dozen participants were reportedly killed either by gunfire or torture over a period of a few weeks, but when a similar uprising immediately encompassed nearly 200 localities in November 2019, authorities responded much more quickly and decisively.

Over 1,500 people were killed when the Islamic Revolutionary Guard Corps opened fire on crowds in various cities, and at least 12,000 were arrested. Amnesty International later published a report titled Trampling Humanity which detailed some of the torture that followed those arrests and continued for several months. The crackdown served as a kind of dry run for the oversight of similar repression by Raisi, who was the head of Iran’s judiciary at the time.

Raisi had been appointed to that position months earlier by Supreme Leader Ali Khamenei, and the appointment was specifically intended to set the stage for a violent response to unrest like that which had challenged the regime’s authority at the start of 2018. Khamenei himself acknowledged that the initial uprising had been largely organized and facilitated by the People’s Mojahedin Organization of Iran (PMOI/MEK).

Thirty years earlier, the MEK had been the focus of the single worst instance of political violence in the history of Iran its supporters made up the vast majority of the 30,000 political prisoners killed in a months-long series of mass executions. It is surely no coincidence that Raisi was one of the leading instigators of that massacre, having been one of four officials to serve on the Tehran “death commission.”

Protesters both inside Iran and throughout the Iranian diaspora warned that Raisi’s appointment to the presidency was a precursor to even worse repression that had occurred when he was in charge of the judiciary. These warnings expanded to include references to the overlap between Iran’s foreign and domestic policies when it became clear that Raisi’s deputy in the judiciary, Gholamhossein Mohseni Ejei, would take over for him as head of that branch of government. Ejei had previously served as both General Prosecutor and Intelligence Minister, meaning he has played a role in the harsh sentencing of activists at home as well as in attacks on dissidents living outside Iran.

Raisi and Ejei’s joint leadership of the executive and judicial branches is widely expected to coincide with an increase in the regime’s malign behaviors in several areas. But for those who have been paying close attention in recent years, it should be apparent that regardless of their infighting, both regime’s factions collaborate when comes to severe crackdowns on dissent, as well as foreign terrorist plots.

First among incidents in that latter category is the 2018 plot to bomb an Iranian Resistance gathering near Paris. This was foiled by European authorities, eventually leading to prison sentences for the regime’s diplomat-terrorist and three accomplices. But even though the highest officials in the Iranian regime have been implicated in that plot, Tehran has faced no consequences for it. Western policymakers have proven willing to overlook even this in the interest of preserving the status quo and pursuing the restoration of the nuclear deal.

If they are so willing to overlook threats to their own interests, it is no surprise that those same policymakers are paying little attention to the threat that Raisi’s leadership poses to activists and dissidents inside Iran. In September alone, at least four such individuals were tortured to death in prison, and many others remain at risk from systematic mistreatment and medical neglect. If the international community offers no serious response to these and other examples of worsening violence and repression, then it is all but certain that such incidents will further proliferate. This is especially true in light of signs that public unrest is re-emerging on a grand scale.

Instead of focusing on the regime’s duplicity regarding the nuclear deal, the international community should focus on the regime’s disregard for human rights and the tensions between that regime and the people it rules over.

Raisi should be allowed to attend the Cop26. If he travels, the United Kingdom, and Scotland, should use the universal jurisdiction and arrest Raisi for his role in the 1988 massacre. This would certainly limit the regime’s human rights abuses and export of terrorism because the mullahs understand that their crimes would not be overlooked anymore.