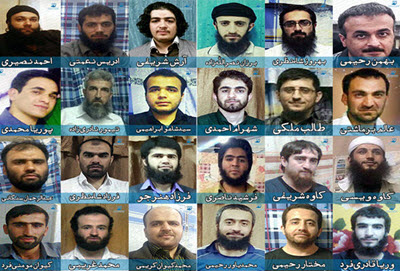 NCRI – A global news magazine has reported that, with a rise in executions generally in Iran, and this week’s mass execution of Sunni Kurds, the trend under the regime’s President Hassan Rouhani is far from moderate.

Blasting News quoted Mohammad Mohaddessin of the National Council of Resistance of Iran (NCRI): the Iranian regime was “resorting to increased executions to create a climate of fear and to prevent the possibility of a nationwide uprising.” He said that more than 2500 people have been executed under Hassan Rouhani, “who falsely claimed to seek moderation.”

The Chair of the NCRI Foreign Affairs Committee also said that this week’s mass execution took place on the anniversary of the 1988 massacre of 30,000 political prisoners in Iran, who were primarily members of the main Iranian opposition group People’s Mojahedin Organization of Iran (PMOI or MEK).

The president-elect of the NCRI, Maryam Rajavi, “a leading Iranian dissident” called the mass execution “an appalling “crime against humanity,” Blasting News said.

The magazine in its August 3 report said that the relatives of the at least 21 executed this week at Rajai Shahr (Gohardasht) Prison were asked to come and say their goodbyes only to be told while in transit that they should instead collect the body of their loved one.

Blasting News noted that Rouhani is at times portrayed as a reforming moderate, with recent press reports describing his asking the civil service if the service’s entrance exam favoured men. The magazine continued, “With the hijab still required attire, and numerous other repressive laws in place, however, Iran’s actual commitment to reform is questionable at best.”

“Iran trails only China, a country more than ten times its size, when it comes to executions,” Blasting News said. “Many of those executed are dissidents,” it reported.

Citing Amnesty International, the magazine reported that, as of April, there had been a 31% rise in the number of executions, with 58 carried out in public, and 16 women and four juveniles among the dead.

Blasting News also said that Iran’s legal system was “highly suspect,” with widespread reports of torture and forced confessions. “With the court system heavily influenced by the ruling regime, it’s doubtful that many Iranians ever receive a fair trial.” the magazine concluded.