Mullah “Ahmad Jannati” fears the public discontent against the 1988 massacre 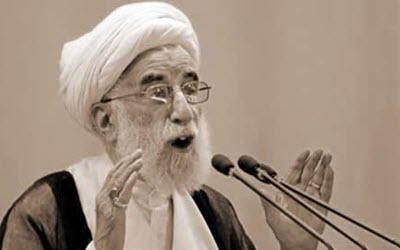 NCRI – Mullah “Ahmad Jannati”(chairman of Guardian Council): Imam (Khomeini) said that these (PMOI/MEK)  must be eradicated so that the roots of the system remain unharmed.

During this week’s Friday Show in Tehran, Mullah “Ahmad Jannati” expressed his fears from the advocacy movement for the 1988 massacre while defending Khomeini’s verdict regarding the mass execution of  prisoners in 1988. He added: ”This case (PMOI/MEK) and the publication of the audio file belonging to that credulous Sheikh(Mr. Montazeri), has turned into an excuse by means of which Mojahedin (PMOI/MEK) are trying to denounce our system and Khomeini”.

Jannati claimed that Mojahedin (PMOI/MEK) are now being supported by France, United States and Britain and added: … these (countries) are supporting Mojahedin; … They’re planning to gradually strengthen them and give them a more political role. These are the issues we are facing now; What Imam did was implementing the Islamic law.

This criminal Mullah defended Khomeini’s verdict for mass execution of Mojahedin (PMOI/MEK) and tried to justify it by saying: “Imam truly did the right thing since Mojahedin were the source of corruption and Imam (Khomeini) was trying to eradicate corruption. I hear some people say “what about Islam’s compassion?” Well, Islam has both compassion and roughness. Imam (Khomeini) said that these (PMOI/MEK) need to be eradicated so the roots of the system remain unharmed. Quran also considers these as “warriors” and gives orders to cut off their hands and their feet, to send them into exile and to hang them. This is Islamic law”.