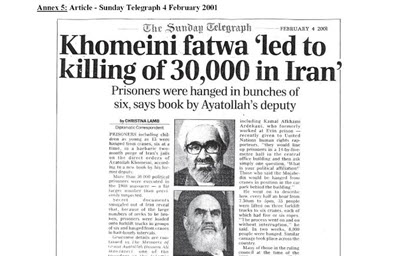 NCRI – The International Committee In Search of Justice published on Tuesday a new 21-page report about the 1988 massacre of political prisoners in Iran, titled: “Horrifying Audio File of Top Iran Official Confirms the 1988 Massacre of Political Prisoners.”

The recent publication of a shocking audio recording from Hossein-Ali Montazeri, the former designated successor to the Iranian regime’s Supreme Leader Khomeini, in the midst of the mass execution of political prisoners in the summer of 1988, has revealed a further dimension of this horrific crime and underscores the need to investigate this atrocity, the Brussels-based ISJ has said.

More than 30,000 political prisoners, mainly from the main opposition group People’s Mojahedin Organization of Iran (PMOI or MEK), were executed.

The ISJ pointed out that the same officials in charge of the 1988 massacre are still at the helm of the regime and are involved in the suppression and destruction of Iranian society.