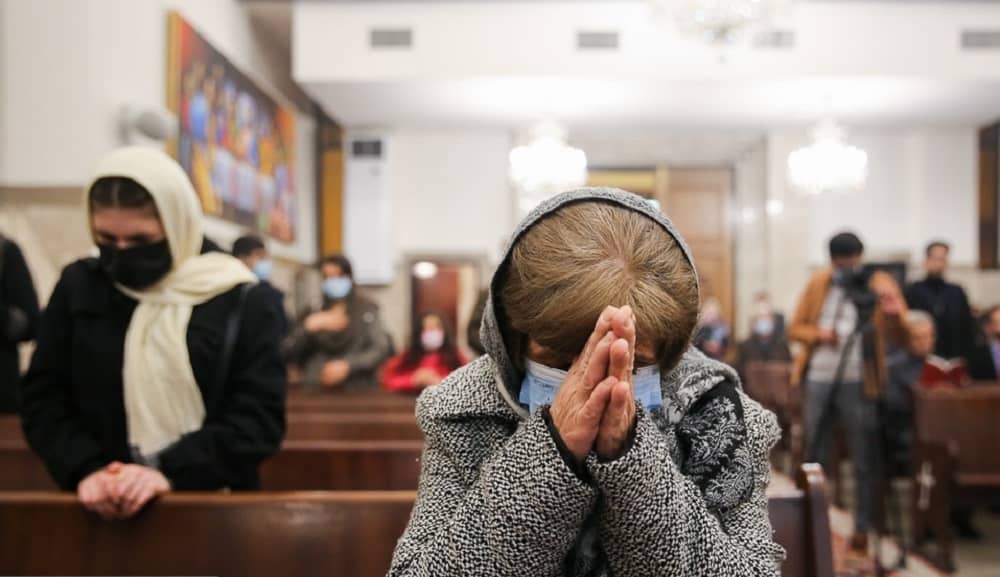 Open Doors, a non-governmental organization defending Christian communities throughout the world, produces an annual ranking of countries based on the danger they pose to Christians living or visiting them. Unsurprisingly, Iran ruled by the clerical regime consistently ranks among the most dangerous – eighth in the latest ranking.

Now, Open Doors has partnered with three other organizations, Article 18, Middle East Concern, and Christian Solidarity Worldwide, and focused on the rights and freedoms of Christian communities, in order to publish an overview of the situation Iranian Christians faced in 2021. The report confirmed that perennial issues of persecution and interference with Christian worship persisted during that year and arguably worsened, especially following the June installment of well-recognized human rights violator Ebrahim Raisi as the nation’s president.

The report on “Rights Violations Against Christians in Iran” acknowledged that Raisi played a leading role in the execution of thousands of political prisoners during the 1980s, and it noted that “few international observers anticipated improvements” under his leadership, “and rights’ violations continue to be widely reported.”

Those abuses often take the form of raids on private, home-based churches, many of which lead to arrest and prosecution. The report also notes that more mainstream churches have been subject to property seizures, which continued in 2021. Although conversion to any religion other than Islam is illegal under Iran’s ruling theocracy, historically, Christian communities and some expatriate groups are ostensibly permitted to practice their faith. But in reality, the clerical regime’s authorities have long interfered with that practice as well, and opportunities for traditional worship are continually shrinking.

The report points out that the Iranian judiciary denies arresting anyone based solely on their faith, but it adds that authorities find a pretense for carrying out those arrests by labeling home churches as gatherings of “enemy groups” or a “Zionist Christian cult,” intended to undermine national security. Furthermore, the law formally criminalizes such gatherings as proselytization to Muslims if they are conducted in the Persian language or if they grant admission to converts from Islam.

In February 2021, the regime’s Penal Code was amended to increase the penalties for proselytization or “engaging in propaganda that educates in a deviant way contrary to the holy religion of Islam.” That “crime” now carries a five-year prison term, and several individuals have been prosecuted accordingly. The recent joint report identifies more than a dozen individuals sentenced in 2021 to prison terms of between three months and five years, based on their Christian faith.

The report also emphasizes that this figure only represents the number of convictions that could be independently verified. The Iranian regime’s judicial system is notoriously secretive, and the statistics cited by NGOs are largely the result of investigative work by activists inside Iran. This work is unlikely to be comprehensive, however, and it is widely assumed that there are invariably arrests, prosecutions, and convictions that go unreported.

The report confirmed 59 instances of arrests targeting Christians, of which 38 could be linked to documented judicial cases. Of those, 12 reportedly involved enforcement activities by the Revolutionary Guard Corps (IRGC).

After being formally sworn in in August, President Raisi appointed a cabinet dominated by IRGC commanders, including many who are under Western sanctions and at least two who are subject to international arrest warrants. Moreover, governors of key provinces have been appointed from the ranks of IRGC commanders. That fact seemed to underscore the warnings offered by Amnesty International and other human rights groups in the wake of Raisi’s appointment, regarding the regime’s apparent assertion of “impunity” in matters of human rights and international law.

Nevertheless, Open Doors, Article 18, MEC, and CSW concluded their report by calling upon “members of the international community to assist in holding Iran accountable for upholding its obligation to ensure and facilitate freedom of religion or belief for all its citizens by highlighting this principle during political and/or economic discussions with, or concerning, Iran.”

Finally, the report encouraged other human rights defenders to keep the focus on issues of concern to Iranian Christians, among other groups. Such advice could apply equally to contemporary issues and to incidents from the history of the clerical regime which remain unresolved. Certainly, the regime’s persecution of Christians has a long history, and that history overlaps with the history of attacks on other groups.

In 1994 three Iranian bishops were brutally assassinated after expressing opposition to the system of absolute rule by the clerics. Afterward, the regime made efforts to frame Iran’s leading opposition group, the People’s Mojahedin Organization of Iran (PMOI/MEK), for the murders, and ultimately held a mock trial on national television for three women who presented false confessions to having killed the priests under MEK’s direction.

The United Nations later appointed a Tunisian lawyer Abdolfatah Amoor as a special rapporteur on religious and minority rights and tasked him with visiting Iran to investigate the situation facing religious minority communities. Following that visit, Amoor delivered a comprehensive report which included a chapter dealing with the fallout from the assassination of Reverends Tatavous Michaelian, Mehdi Dibaj, and Haik Hovsepian Mehr.

“According to the information received,” that report stated, “the Iranian Government had apparently decided to execute those Protestant leaders in order not only to bring the Mojahedin organization into disrepute abroad by declaring it responsible for those crimes but also, at the domestic level, partly to decapitate the Protestant community and force it to discontinue the conversion of Muslims.”

The persecution of Christians in 2021 was only one part of a much broader repressive trend. Other elements include an accelerated rate of executions and expanded abuse of political prisoners, much of which specifically targets MEK affiliates, viewed by the regime as threats to the existing clerical dictatorship.