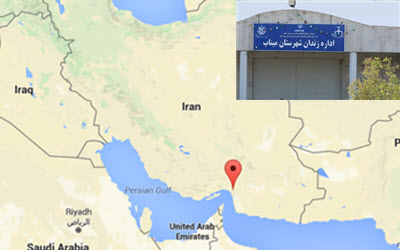 NCRI – Prisoners in Minab’s jail, southern Iran, are facing systematic abuse by the regime’s prison guards, an ex-prisoner has revealed.

The prisoner has stepped forward with information about the systematic rape and torture of prisoners by the regime’s wardens.

Wardens in Minab Prison use a structural column there to tie the hands and feet of prisoners so that the prisoner cannot turn his head. The prisoners are kept in this state as a form of punishment which can last as long as 10 to 15 days.

The mullahs’ henchmen have named the column “place of worship” and claim that it “cures” prisoners’ “ills” and “wrong-doings.”

Prisoners are also faced with a poor state of hygiene, food and medicine. When ill, prisoners are belatedly, and sometimes never at all, taken to the prison infirmary.

About 1000 prisoners are held in the jail.

The United Nations Human Rights Council voted on Wednesday to extend the mandate of Dr. Ahmed Shaheed, the UN Special Rapporteur on the Situation of Human Rights in Iran.

Political prisoners in Iran, including supporters of the main opposition People’s Mojahedin Organization of Iran (PMOI or MEK) had written to Council Members earlier this month urging them to support the extension of Dr. Shaheed’s mandate in this Council session.

Dr. Shaheed last week raised continuing serious concerns about the extremely high rate of executions, especially for juvenile offenders, and fundamental flaws in the administration of justice in Iran.

Iran’s regime executed at least 966 prisoners in 2015, the highest such rate in 10 years, Dr. Shaheed said as he presented his latest report to the UN Human Rights Council in Geneva on March 14.