Written by Mahmoud Hakamian
4th May 2020 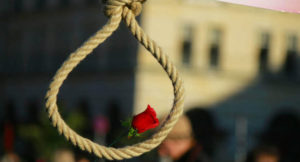 Following is a summary of the Iran HRM report:

In April 2020, while Iran and the rest of the world were dealing with coronavirus (COVID-19), the regime resorted to increased suppression of its people.

The regime launched a new wave of executions, killing at least 32 people in 14 cities, including juvenile offenders and ethnic minorities. Many of those executed had participated in protests over conditions in prisons, particularly in light of the Covid-19 pandemic, and the regime’s failure to allow them temporary leave to stop the mass spread of the disease in prisons.

According to the leading rights group, on April 11, the regime hanged Iranian Kurdish political prisoner Mostafa Salimi. Salimi, 53, was one of roughly 80 prisoners who escaped Saqqez prison, in Kurdistan province, following a protest on March 27. He was rearrested days later.

In another part of its Monthly report Iran HRM reported that how the Iranian regime also executed another one of the people who escaped Saqqez prison on March 27 but was rearrested. Shayan Saeedpour was jailed for manslaughter after killing someone in a street fight when he was just 17 at time of arrest.

Amnesty International said that “his execution may have been an act of retaliation by the local prosecution authorities, intended to deter other prisoners from attempting similar escape plans”.

According to Iran HRM, on April 18, they executed Majid Esmailzadeh in Ardabil prison, even though he was also sentenced to death for an alleged crime committed before he turned 18, while on April 23, Sina Mohammadi was executed for a murder that he is said to have committed while underage.

Juvenile offender Danial Zeinolabedin was executed on April 2, after he was beaten by officials in Miandoab prison, following a protest in Mahabad prison on March 28.

Michelle Bachelet, the UN High Commissioner for Human Rights condemned the executions of the child offenders on April 22.

The executions continued during the Islamic holy month of Ramadan.

On April 21, Shahram Baygan was hanged in Tabriz Central Prison, without his family being informed. He was hospitalized after being badly beaten by guards during a protest over prison conditions in March.

On April 24, Baneh residents Abdul Vahed Faizi and Ramyar (Payam) Mokhless were executed in Sanandaj Central Prison. The Kurdish men were reportedly arrested for murder. That same day, a member of the Baluch ethnic minority, Abul Baset Dahani was hanged in Zahedan.

In late April, Soleiman Mirzayi and Vahed Rostamzadeh, 30, were executed on drug charges in Borujerd and Hamedan prisons, respectively.