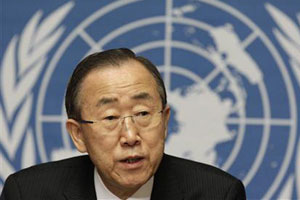 United Nations Secretary-General Ban Ki-moon on Monday condemned the Iranian regime’s execution of two minors last week, while voicing his concern about the rise in executions in Iran.

“(Ban) is deeply saddened by the news of the execution of two juvenile offenders last week in Iran,” Secretary Ban’s press office said in a statement.

It added that Iran’s regime has ratified both the International Covenant on Civil and Political Rights and the Convention on the Rights of the Child, which prohibit the death penalty for anyone under the age of eighteen.

“Over 700 executions are reported to have taken place so far this year, including at least 40 public, marking the highest total recorded in the past 12 years,” it said.

The U.N. said the majority of Iranian death sentences were imposed for drug-related offences – crimes that fall below the threshold of the “most serious crimes” as required by international law.

Activist groups say the Iranian regime’s human rights record should remain under scrutiny following a July 14 deal with world powers in which Tehran will see economically crippling sanctions against it lifted in exchange for curbs on its nuclear program, Reuters reported.

Fatemeh Salbehi, a 23-year-old woman, was hanged in the Iranian province of Fars on October 13 for allegedly killing a man she had been forced to marry when she was just 16.

A week earlier Samad Zahabi was hanged in Kermanshah province for allegedly shooting a fellow shepherd when he was just 17.

U.N. human rights experts said Iranian authorities did not provide the required notice to Zahabi’s family or lawyer ahead of the hanging.

More than 160 juvenile offenders are believed to be on death row in Iranian prisons, according to Amnesty International.