Maryam Rajavi’s message to Berlin conference for democracy in Iran 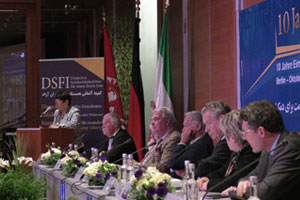 NCRI – German political dignitaries and members of the Bundestag last week held a conference in Berlin in solidarity with the cause of the Iranian Resistance to bring freedom, democracy and human rights to Iran.

The conference, held on October 13, 2015, was chaired by Mr. Otto Bernhardt, President of the German Solidarity Committee for a Free Iran. Mrs. Rita Süssmuth, former speaker of the Bundestag, was among the panelists.

In a message to the conference, the Iranian Resistance’s President-elect Mrs. Maryam Rajavi said:

My warmest greetings to your invaluable conference on the tenth anniversary of the formation of the German Solidarity Committee for a Free Iran. I would like to extend my gratitude to the founders and leaders of this committee who have advocated the right policy on the greatest threat to the Middle East and the world today, namely the religious fascism ruling Iran.

Ten years past the formation of this committee, Germany’s history and collective conscience of its people judge whether it was right to appease and embolden Iran’s religious dictatorship to impede the path of freedom and progress in Iranian society and engulf the Middle East in blood. Or the right approach was the pioneering policy of the German Solidarity Committee for a Free Iran that finds the future of Iran including the true blossoming of Iran-Germany relations in supporting the Iranian people’s Resistance?

Was it right to give concessions to the mullahs and turn a blind eye on the regime’s savagery and barbarism that destroyed Iran’s economy so much that it is not capable of attracting foreign investment even now after the sanctions are lifted, or the right thing to do was the committee’s staunch defense of freedom and democracy in Iran as the only path to peace and stability in the entire region?

The Committee’s endeavors in defending PMOI (MEK) members in Camp Ashraf and Camp Liberty in the face of continued attacks by the Iranian regime’s operatives, including six massacres in recent years, and its incessant struggle for human rights and freedom in Iran constitute an exemplary courageous struggle in circumstances that long-term interests of the two nations of Iran and Germany were being sacrificed for petty political interests.

Regardless of their extent of atrocity and bloodletting, governments like the Iranian regime are doomed to go. However, it is the friendship between the nations of Iran and Germany that remains eternal.

While in the midst of relentless executions of Iran’s juvenile by the mullahs, politics stands by the regime, while the families of execution victims and the Iranian youths furiously watch the business and political delegations from Germany and other European countries go to the mullahs without having any qualms about human rights in Iran, it is exactly in such circumstances that your committee and all the parliamentarians and politicians who are in line with the Committee’s platform and path protect the real values of the people of Germany and all peoples of Europe. You represent a hopeful future where bilateral relations are based on genuine interests of both nations, not on the extortion and harassment by a bunch of oppressive mullahs.

If the mullahs’ president Rouhani had the slightest intention of moderation, the situation of human rights in Iran had improved, while the executions over the past two years have reached the highest number in quarter of a century. Therefore, Western governments can no longer justify their silence over flagrant violations of human rights in Iran and the regime’s interferences in Syria and Iraq under the discredited pretext of helping moderates within the Iranian regime.

If a responsible policy had been adopted instead of this erroneous policy, the mullahs’ criminal occupation of Iraq, the emergence and expansion of the ISIS, the massacre of 300,000 Syrians, the growth of fundamentalism and terrorism in European countries and the flow of refugees into Europe as well as the detrimental interference of Russia in Syria, could have been avoided all together.

No doubt, this politically failed and morally scandalous era has reached the end of the line; the era when human rights are stoned in Iran and auctioned off on the international level must come to an end.

As long as the mullahs do not encounter any obstacles to their executions and repression in Iran, they are going to continue their terrorism and interference in the region and endanger the world. Therefore, the government of Germany and all European governments are expected to:

Make their relations with the Iranian regime contingent upon the end to death penalty;

Deliver on promises to protect the PMOI (MEK) in Camp Liberty and end its inhuman siege.

I wish you all success. 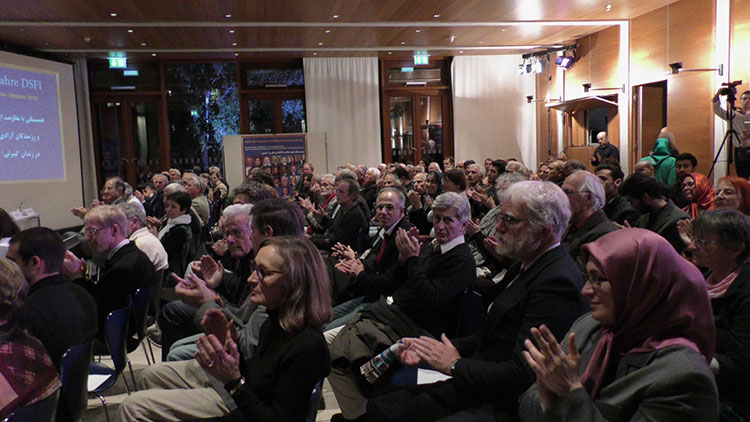