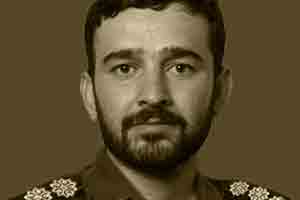 IRGC Col. Moslem Khizab, who for years was in charge of the regime’s Ya Zahra Batallion of the 14th ‘Imam Hossein’ Division of the IRGC in Isfahan, was killed in fighting in north-west Syria, state-run Saheb News said.

Khizab is the fifth senior IRGC officer to be killed in Syria in recent weeks.

Also on Tuesday the pan-Arab Al-Jazeera television station reported that Nader Hamid, an official from the IRGC’s paramilitary Bassij force, who had been injured in fighting in Syria several days earlier has died.

Hamid was in charge of organizing Syrian dictator Bashar al-Assad’s paramilitary forces in the civil war.

Hasounizadeh was a former commander of the Saberin Brigade, a Special Forces unit of the IRGC.

Mokhtarband was the former chief-of-staff of the 1st Brigade in Ahvaz, south-west Iran.

Brigadier General Hossein Hamedani, the most senior General in charge of the Iranian regime’s forces fighting in Syria to keep dictator Bashar Assad in power, was killed on October 8 on the outskirts of the city of Aleppo, the Iranian regime’s state media announced. Hamedani was a deputy to Gen. Qassem Soleimani, the commander of the IRGC Quds Force.