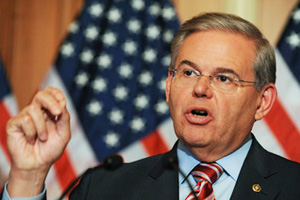 NCRI – Following the October 11 ballistic missile launch by the Iranian regime, U.S. Senator Bob Menendez (D-NJ), a senior member of the Senate Foreign Relations Committee, on Monday sent a letter to U.S. Secretary of State John Kerry recommending the Obama Administration tighten discretionary, non-nuclear sanctions on Iran’s regime for violating United Nations Security Council Resolution (UNSCR) 1929 and support efforts to extend the sanctions provisions in the Iran Sanctions Act – which are set to expire in 2016 – to allow for a snapback mechanism for the Iran nuclear agreement, according to a statement by his office.

Sen. Menendez wrote: “The Iranian regime is drawing a line in the sand that demonstrates with malice that it will only selectively meet its obligations with respect to internationally sanctioned weapons programs… I write to recommend to you that you use the Administration’s discretionary authority to tighten the full range of sanctions available to you to penalize Iran for violating UNSCR 1929.”

U.S. administration officials have previously testified that tightening sanctions for non-nuclear related infractions would not violate the terms of the July 14 nuclear agreement with the Iranian regime.

The recent test launch of a precision-guided, long-range ballistic missile by Iran was a violation of United Nations Security Council Resolution (UNSCR) 1929, and I appreciate public statements from both the White House and the Department of State memorializing this fact. As we discussed during your July 23 appearance before the Senate Foreign Relations Committee (SFRC), UNSCR 1929 stipulates that Iran cannot presently engage in activities related to ballistic missiles.

But, with the October 11 launch, Iran has done so – on several levels – whether it is through research, development, planning, concealing or launching this reportedly new technology. And as some of my colleagues on the Senate Foreign Relations Committee have pointed out in separate correspondence to you, Iran’s violations of UNSCR 1929 have become common. The Iranian regime is drawing a line in the sand that demonstrates with malice that it will only selectively meet its obligations with respect to internationally sanctioned weapons programs. What meaningful steps will the Administration take to respond to the latest Iranian provocations?

As Iran is prone to do, this is a test of American commitment and resolve, which, I believe, must be met with a decisive response in the language that Iran understands – for every action there is a consequence. I write to recommend to you that you use the Administration’s discretionary authority to tighten the full range of sanctions available to you to penalize Iran for violating UNSCR 1929. From your responses at the July 23 SFRC hearing, I understand that tightening sanctions for non-nuclear related infractions would not violate the terms of the Iran Nuclear Agreement, even if it were presently in its full implementation phase. The Administration should also encourage P5+1 partners to respond with similar measures. Does the Administration plan to use its current authority to tighten available sanctions against Iran?

Iran is not only testing the Administration, it is also testing our international partners. The launch, coordinated on the same day that Iran’s Parliament approved the general outline of the Iran Nuclear Agreement, should send a clear signal to the United States, the P5+1, and the United Nations Security Council that Iran’s nuclear program and its weapons programs are linked – and that the Iranian regime has every intention of maintaining this status quo. The Administration should lead the P5+1 and the UNSC to respond swiftly, decisively, and unapologetically.

The series of test launches of Iranian ballistic missiles that have led us to this point are part of a larger weapons development program, that when taken together with Iran’s history of deception, its opaque nuclear capabilities, past violations of the Nuclear Non Proliferation Treaty, its fiery rhetoric, destabilizing activities throughout the region, and well-documented malign intent, requires a strong international response. The time to act is now, before Iran can exploit UNSCR 2231, which – because this particular resolution failed to incorporate the same mandatory language in UNSCR 1929 – does not prohibit these threatening activities.

Finally, as one of the authors of the sanctions regime that brought Iran to the negotiating table, I take this opportunity to again remind you that the provisions of the Iran Sanctions Act expire in 2016. If snapback provisions of sanctions are to be an effective deterrent, as the Administration has testified before the SFRC, will the Administration now agree to support the reauthorization of these critical sanctions? Failing to reauthorize these provisions is also a message to the Iranian regime, which presently seems to be undeterred. I look forward to your responses.