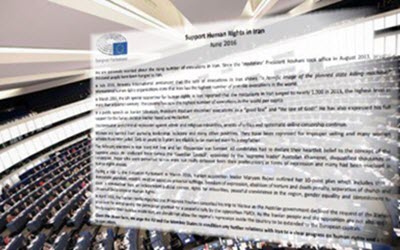 NCRI – The following is the text of a statement unveiled on Tuesday, June 14, 2016 which has been signed by more than 270 Members of the European Parliament on the European Union’s policy regarding Iran.

The MEPs urged the EU and its Member States to condition any further relations with Iran to “a clear progress on human rights and a halt to executions.”

In March 2016, the UN special rapporteur for human rights in Iran reported that the executions in Iran surged to nearly 1,000 in 2015, the highest level in more than a quarter-century. The country has now the highest number of executions in the world per capita.
In a public speech on Iranian television, President Rouhani described executions as a “good law” and “the law of God!” He has also expressed his full support for the Syrian dictator Bashar Assad and Hezbollah.
Discrimination and criminal repression against ethnic and religious minorities, arrests of critics and systematic online censorship continue.

Women are banned from pursuing leadership, judiciary and many other positions. They have been repressed for improper veiling and many women activists have been jailed. Girls as young as 9 years are eligible to be married even to a stepfather.
The February elections in Iran were not free and fair. Opposition was banned. All candidates had to declare their heartfelt belief to the concept of the supreme clergy. An unelected body named the ‘Guardian Council’, appointed by the ‘supreme leader’ Ayatollah Khamenei, disqualified thousands of candidates. Those who were permitted to run were not really different from their predecessors in terms of repression and many had been involved in human rights abuses.

During a visit to the European Parliament in March 2016, Iranian opposition leader Maryam Rajavi outlined her 10-point plan which includes that a democratic pluralistic republic must be based on universal suffrage, freedom of expression, abolition of torture and death penalty, separation of church and state, a non-nuclear Iran, an independent judicial system, rights for minorities, peaceful coexistence in the region, gender equality and commitment to Universal Declaration of Human Rights.

In April 2016, the Iranian media reported that President Rouhani cancelled his trip to Vienna as the Austrian government declined the request of the Iranian president for withdrawing the permission granted for a peaceful rally by the opposition PMOI. As the Iranian people and the opposition are not allowed to freely express their opinion inside Iran, we should not allow the regime’s repression inside the country to be extended to the European capitals.

Given the above facts, we urge the EU and the Member States to condition any further relations with Iran to a clear progress on human rights and a halt to executions.