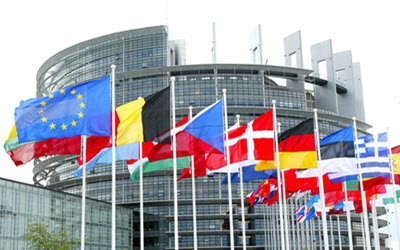 NCRI – More than 270 Members of the European Parliament have signed a joint statement on Iran, calling on the European Union to “condition” its relations with Tehran to an improvement of human rights.

The MEPs who are from all 28 EU Member States and from all political groups in the Parliament are concerned about the rising number of executions in Iran after Hassan Rouhani took office as President three years ago.

The following is a text of a statement released on Tuesday by the Office of Gérard Deprez MEP, President of the Friends of a Free Iran group in the European Parliament:

Over 270 Members of the European Parliament have signed a joint statement on Iran, calling on EU to “condition” its relations with Tehran to improvement of human rights.

The MEPs who are from all 28 EU Member States and from all political groups in the European Parliament are concerned about the rising number of executions in Iran after the so called “moderate” president Hassan Rouhani took office three years ago.

According to Amnesty International nearly 1000 people were hanged in Iran in 2015, calling the rate of executions as “a horrific image of the planned state killing machine.”

Iran has currently the highest number of executions in the world per capita. It is also the leading executioner of minors in the world.

Repressive measures against women and the religious minorities have continued to increase.

Despite high hopes that the nuclear agreement with Iran would bring improvements to human rights, the situation has got worse day by day.

The UN special rapporteur on Iran recently announced that rate of hangings are now the highest in the past 27 years.

The recent parliamentary elections were a sham. Opposition was banned. Thousands of candidates were filtered by the ‘Guardian Council’ under orders of Ayatollah Khamenei. Those who were permitted to run were the most loyal to the state and many have been involved in human rights abuses.

Iran’s support for the Syrian dictator Bashar Assad who is responsible for the killing of half a million of his own people and has paved the ground for the expansion of the so called Islamic State or Daesh is also of enormous concern to MEPs.

Speaking from Brussels Gérard Deprez, Chair of the Friends of a Free Iran in the European Parliament, said “It is a great contradiction that we in the EU are so proud that all 28 Member states have abandoned death penalty but we seem to have no problem doing business with the world’s leading executioner-state. If EU does not insist publicly and seriously on improvement of human rights this would be a great damage to our credibility.”

The signatories of the statement include 6 Vice-Presidents of the Parliament as well as several committee chairs and heads of delegations and some vice-presidents of the political groups.

The statement calls on the European Union and the EU Member States “to condition any further relations with Iran to a clear progress on human rights and a halt to executions.”

Vice-President of the MR Party

President of Friends of a Free Iran in European Parliament

Previous articleIran: Prospects for change one year after the nuclear agreement
Next articleText of European lawmakers’ statement on Iran