The 1988 Massacre of Political Prisoners in Iran: Time for the Truth, Justice, Reparation and Guarantees of Non-Recurrence 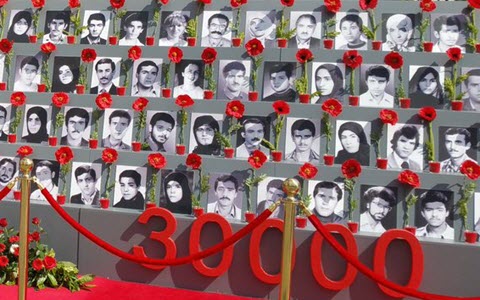 This is the title of a statement submitted to the Thirty-sixth session of the U.N. Human Rights Council will be held 11-29 September 2017, in the European headquarter of the United Nations.

On the 29th anniversary of the 1988 mass extra-legal executions of political prisoners in the Islamic Republic of Iran, we believe that until the full truth is unveiled and the perpetrators are held to account for their crimes, there will be no incentive for the government of Iran to change its policy on human rights. This is why we are calling on the United Nations to launch an independent inquiry into the 1988 massacre to reveal the truth, hold the perpetrators to account and seek justice, reparation and guarantees of non-recurrence.

• The executions took place based on a fatwa by Supreme Leader Ayatollah Khomeini.

• Three-member commissions known as a ‘Death Commission’ were formed across Iran sending political prisoners who refused to abandon their beliefs to execution
• The victims were buried in secret mass graves.

• The perpetrators continue to enjoy impunity.

• In the past year, the names of nearly 100 ‘Death Commission’ members have been revealed. Many still hold senior positions in the Iranian judiciary or government. They include:

o Ali Razini, a Death Commission member, is currently Vice-President of the Judiciary on legal affairs.

o Salman Khodadadi, a Death Commission member, is currently a Member of Parliament and Chair of its Committee on Social Affairs.

o Mohammad-Hossein Ahmadi Shahroodi, a Death Commission member, is currently a member of the Assembly of Experts.

In 2016 an audio tape surfaced of Ayatollah Hossein-Ali Montazeri, Deputy Supreme Leader in 1988, chastising members of the Tehran Death Commission as the executions were taking place.

Montazeri told the Death Commission: “The greatest crime in the Islamic Republic, for which history will condemn us, has been committed by you.”

Montazeri was cast out from power following his protest.

Since the summer of 2016, Iranian civil society has defied the government by breaking the taboo on openly discussing the massacre and demanding justice. In a report published on 2 August 2017, Amnesty International pointed to a campaign by Iran’s younger generation who seek an inquiry into the mass killings of political prisoners in 1988.

The report said: “Human rights defenders targeted for seeking truth and justice include younger human rights defenders born after the 1979 Revolution who have taken to social media and other platforms to discuss the past atrocities, and attended memorial gatherings held at Khavaran.”

It adds that there has been “a chain of unprecedented reactions from high-level officials, leading them to admit for the first time that the mass killings of 1988 were planned at the highest levels of government.”

A video clip of a speech on 22 April 2017 by a student at Tabriz University challenging a top former Revolutionary Guards commander and condemning the 1988 massacre in Iran was widely circulated on social media: “Your theory and your discussions defend the horrific, inhumane, illegal and irreligious massacres of 1988. … We will neither forgive, nor forget your betrayals and crimes. Our people will avenge the pain and grief of the mothers [of the martyrs] of our nation.”

Dr. Mohammad Maleki, the first chancellor of Tehran University after the 1979 revolution and a prominent dissident in Iran, who spent many years in prison under torture, pointed out in an interview with Dorr TV on 14 August 2016 that more than 30,400 of the executed prisoners were members of the opposition People’s Mojahedin (PMOI or MEK) and 2000-3000 were leftists.

Mohammad Nourizad, a close associate to Ayatollah Ali Khamenei prior to the 2009 uprising in Tehran, wrote: “Here, in a matter of 2 or 3 months, 33,000 men, women, young and old were imprisoned, tortured and executed. Their bodies were taken to Khavaran Cemetery and barren lands by trucks and buried in mass graves, happy of what they had done…”

Reza Malek, a former intelligence officer, revealed that according to documents he had personally seen, 33,700 prisoners were executed in 1988.

The Iranian people used the campaign period prior to the undemocratic ‘election’ to highlight the call for justice.

In Qom in May 2017, Iranians chanted against Presidential candidate Raisi: “He is the murderer of 1988“.

Iranian political prisoner Maryam Akbari-Monfared on 15 October 2016 made an official complaint from inside prison to the Iranian judiciary over the execution of her siblings in the 1988 massacre. According to Amnesty International she was subsequently put under further pressure in prison.

In a report (A/HRC/34/65) to the Human Rights Council on 17 March 2017, the UN Special Rapporteur on the human rights situation in Iran criticized the Iranian authorities for repressing victims’ families.

The public attention to this subject has forced the government to engage in massive propaganda to defend the massacre by misrepresenting the facts and blaming the victims.

Ayatollah Ahmad Khatami, a board member of Iran’s Assembly of Experts and Tehran’s acting Friday prayer leader, in a sermon on 21 July 2017 cried out against the calls for justice.

Khatami said: “Confronting them (imprisoned dissidents) and wiping out the Monafeqin (PMOI) was one of the Imam’s most righteous and valuable actions, and all of the persons who complied with his edict should be awarded a Medal of Honour. … However, those who on their websites have switched the place of martyrs and murderers should repent and beg for forgiveness.”

His remarks echoed those of Supreme Leader Khamenei who said on 4 June 2017 that the 1980s were an era of great glory, stressing that “the place of the victim and the executioner should not be changed.”

Mostafa Pour-Mohammadi who was Iran’s Justice Minister until August 2017 was quoted on 28 August 2016, by the state-run Tasnim news agency as saying: “God commanded show no mercy to the nonbelievers because they will not show mercy to you either and there should be no mercy to the [PMOI] because if they could they would spill your blood, which they did. … We are proud to have carried out God’s commandment with regard to the [Mojahedin] and to have stood with strength and fought against the enemies of God and the people.”

In an interview with the state-affiliated Tarikh Online website, aired on 9 July 2017, Ali Fallahian, Iran’s former Intelligence Minister, acknowledged that Khomeini’s 1988 fatwa called for the eradication of all affiliates of the PMOI. Fallahian said that even PMOI supporters whose only crime was to distribute the group’s literature or buy bread or other provisions for them were found guilty of waging war on God and executed.

Fallahian has three international warrants for his arrest; two by German and Swiss magistrates over his role in the assassination of Iranian dissidents abroad, and an Interpol Red Notice over his role in the terrorist bombing of a Jewish community centre in Buenos Aires in 1994.

Mohsen Rafiqdoost, Iran’s former Minister for the Revolutionary Guards (IRGC), in an interview with the state-run Mehr News Agency on 18 July 2017 defended the 1988 massacre, adding: “Today too if we find [PMOI members], we will do the same with them.”

Ebrahim Raisi’s campaign in the weeks leading to the May election continuously sent out messages via the social network Telegram defending the 1988 massacre through misrepresentation of the facts.

With Raisi standing by his side, Yasser Mousavi, the Friday prayers’ leader in Varamin, said at a Raisi campaign rally on 12 May 2017: “This grand figure who is standing next to me is proud to have executed the members of the PMOI.”

Articles seeking to justify the massacre have been published across state media, including online publications, and Intelligence Ministry outlets.

Since 2016, the 1988 massacre has gradually turned into a growing demand by the victims’ families and the Iranian people for transparency and prosecution of those involved. This has already been a major development both from a human rights perspective and from a purely political perspective, indicating that even after 29 years, the massacre remains a benchmark for the Iranian people to judge different factions of the ruling system. Many describe the issue of the massacre as the collective conscience of the Iranian people, which cannot be set aside until the perpetrators are brought to justice.

UN Secretary General António Guterres in a 13 March 2017 report to the Human Rights Council mentioned that the OHCHR has received the copies of dozens of complaint letters addressed to the High Commissioner for Human Rights and to the Prosecutor of the International Criminal Court from families of persons killed in the 1988 mass executions.

Time for the UN to assume its responsibility

What happened in Iranian prisons in 1988 remains a deep scar on the body and soul of the Iranian people. The only way to soothe this wound would be a comprehensive and independent investigation to identify those who abused their power to execute thousands of their ideological opponents.

In a report published in February 2017 (INQUIRY INTO THE 1988 MASS EXECUTIONS IN IRAN), the London-based NGO, Justice for the Victims of the 1988 Massacre in Iran (JVMI), points out that the failure of the international community thus far to investigate this ‘crime against humanity’ and to bring the perpetrators to justice has fuelled a culture of impunity for Iranian officials who continue to violate international law and human rights.

According to international law there is no statute of limitations for crimes against humanity. It is the responsibility of the international community, including the Human Rights Council and Security Council, to attend to this matter and to ensure that accountability is achieved. What gives this matter urgency is that the 1988 mass extra-legal executions have not come to an end. Iran continues to execute people following unfair trials.

The perpetrators of the 1988 massacre still enjoy impunity and most are currently holding key positions in the Iranian administration.

We call on the UN High Commissioner for Human Rights, HE Zeid Ra’ad Al Hussein to order a Commission of Inquiry into the 1988 massacre based on the UN Economic and Social Council Resolution 1989/65 which states in principle 11: “In cases in which the established investigative procedures are inadequate because of lack of expertise or impartiality, because of the importance of the matter or because of the apparent existence of a pattern of abuse, and in cases where there are complaints from the family of the victim about these inadequacies or other substantial reasons, Governments shall pursue investigations through an independent commission of inquiry or similar procedure. Members of such a commission shall be chosen for their recognized impartiality, competence and independence as individuals. In particular, they shall be independent of any institution, agency or person that may be the subject of the inquiry.” 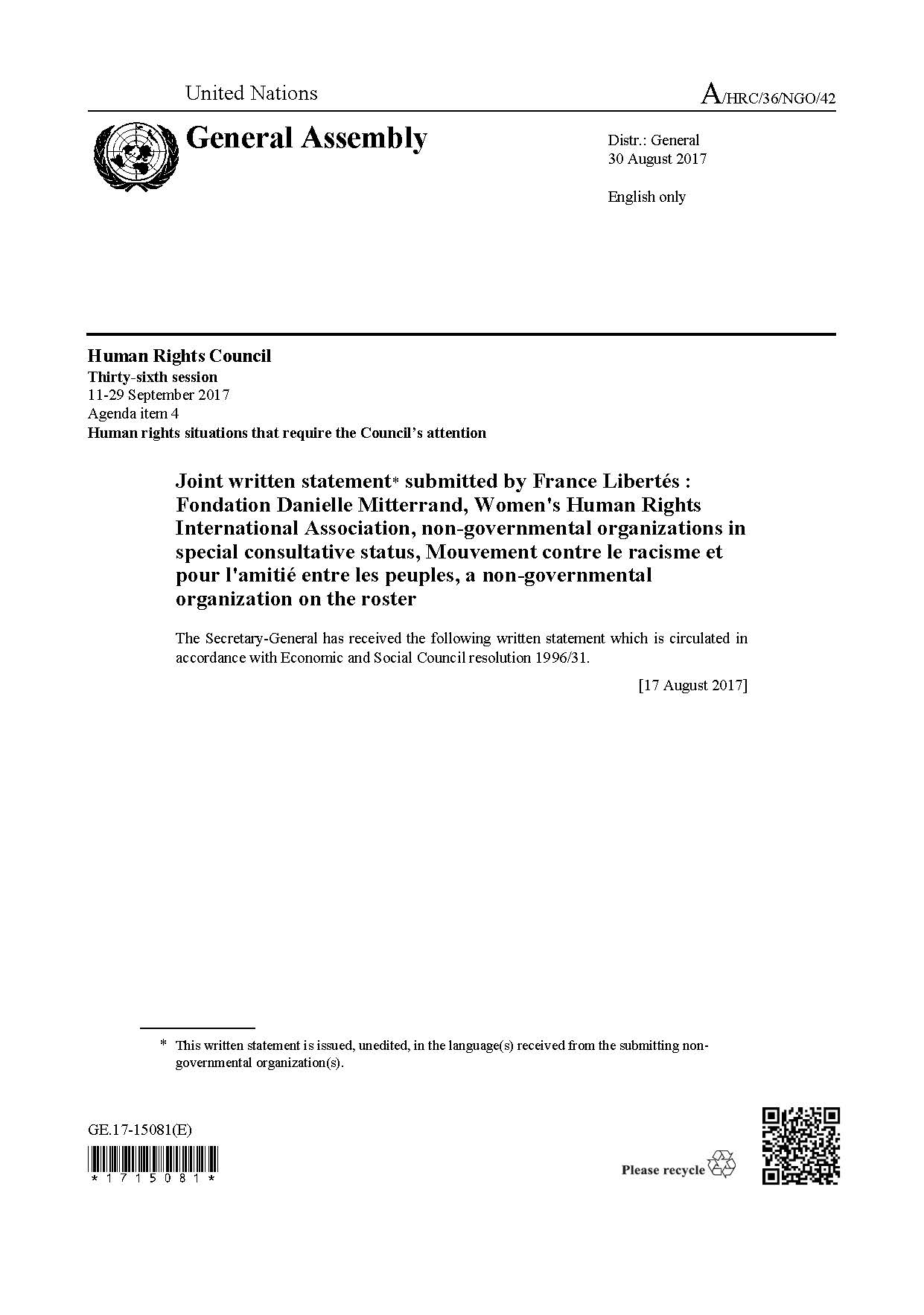 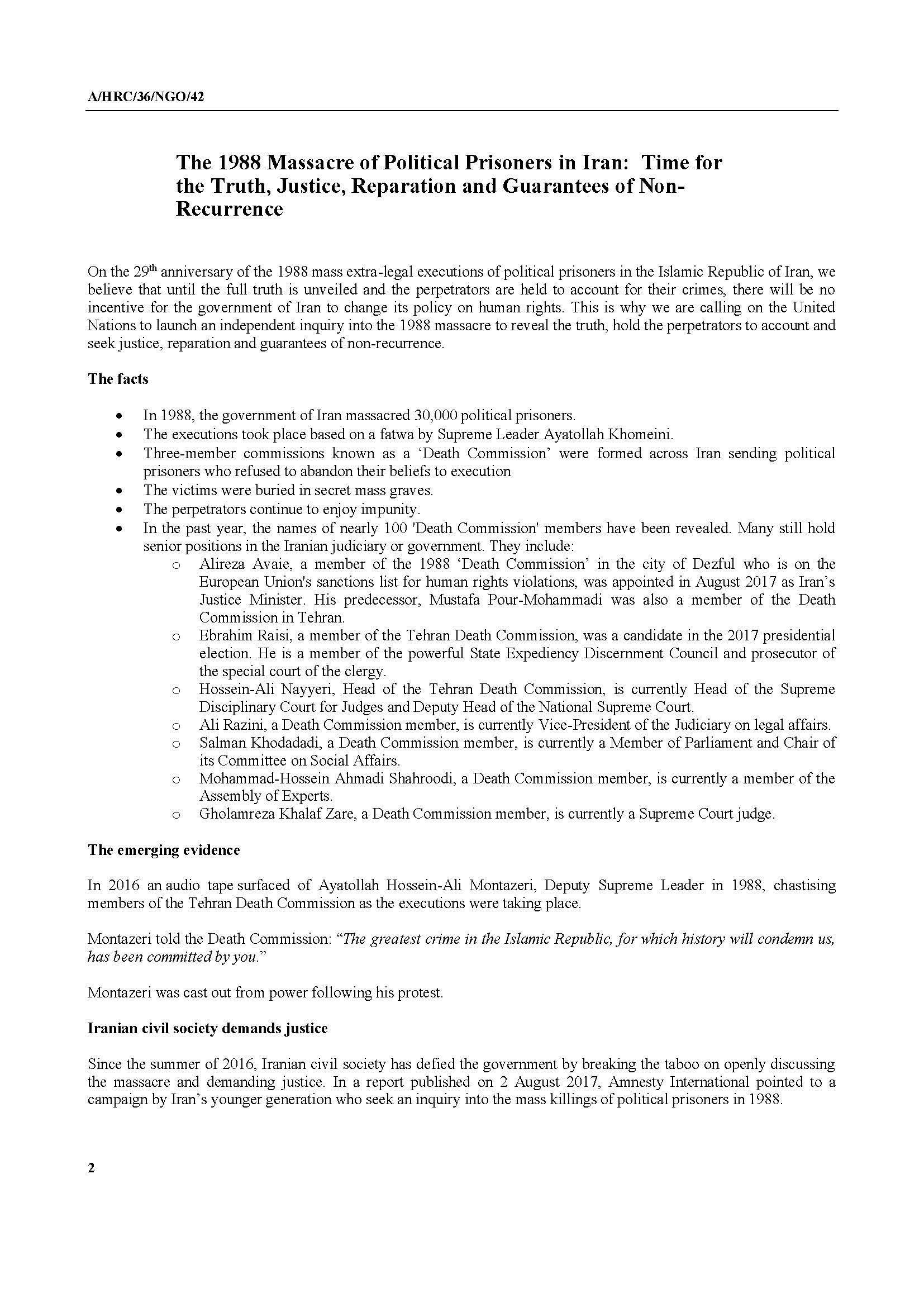 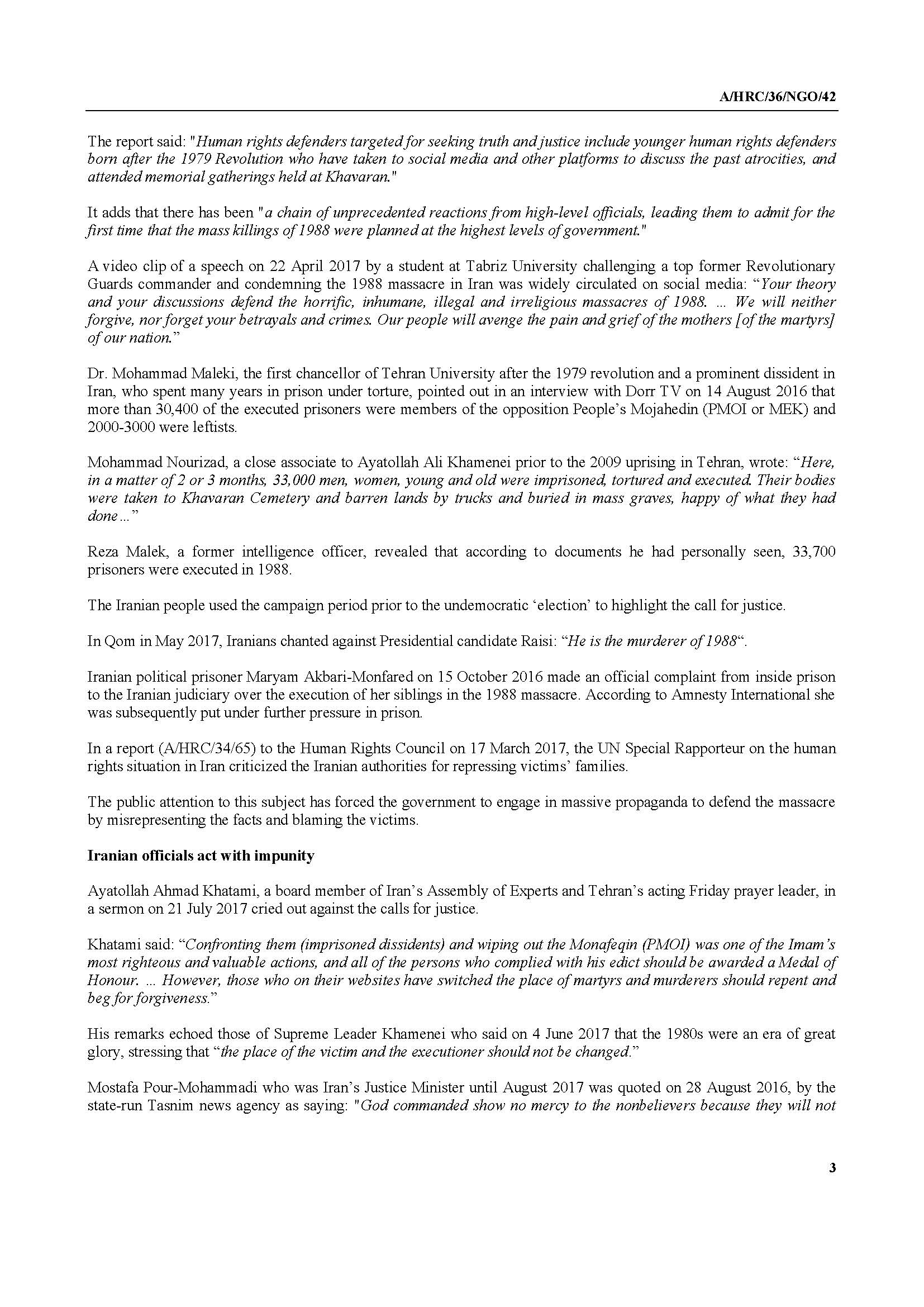 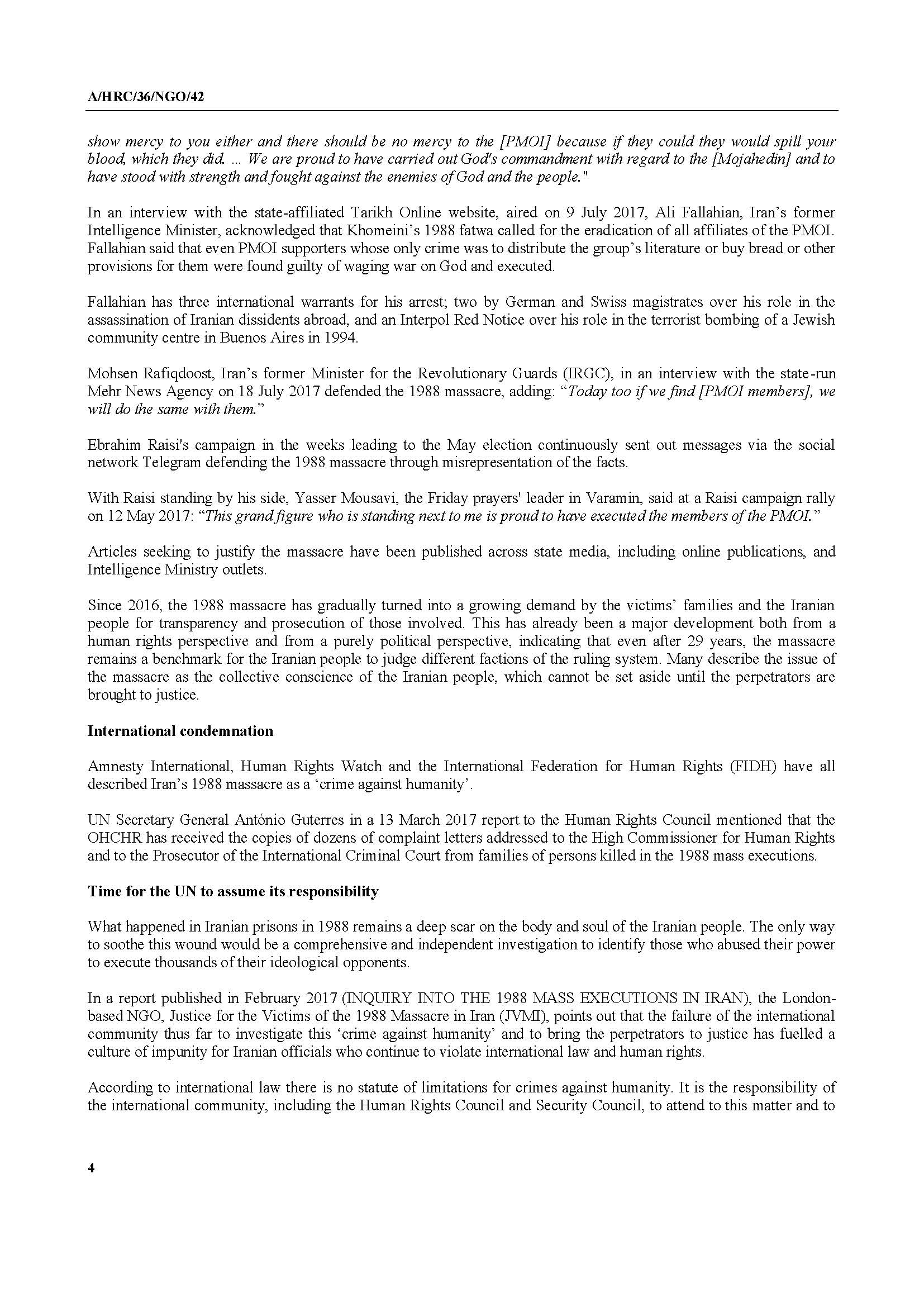 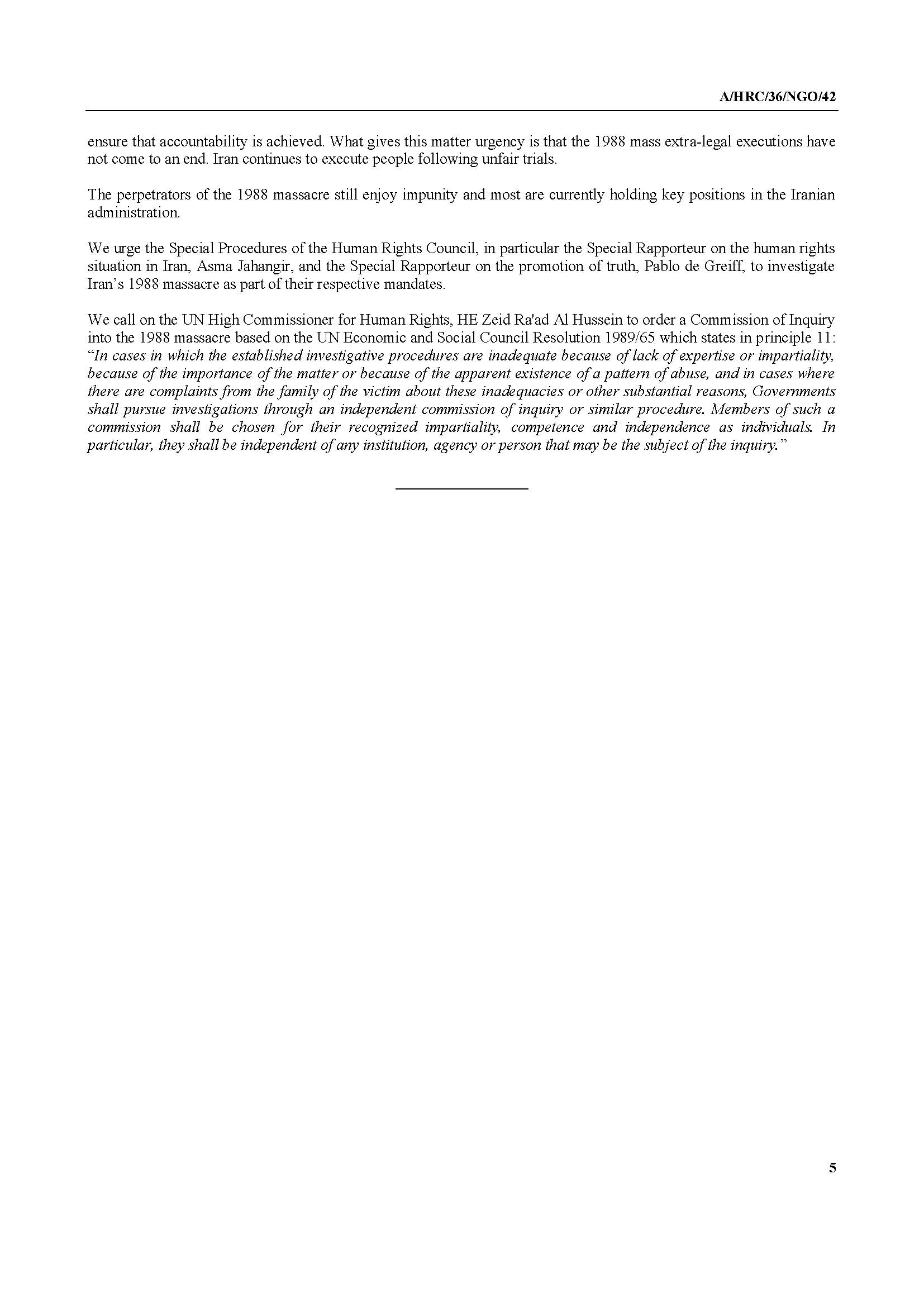 Previous article
Iran’s Psychiatrists Association: One out of Every Four Iranians Has a Mental Disorder
Next article
Catastrophe of Housing and Its Consequences in Iran