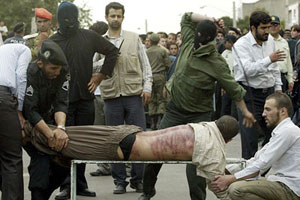 The presence of the Iranian regime’s President Hassan Rouhani at the UN General Assembly in New York on September 28 provides an opportunity to put the spotlight on the regime’s egregious human rights conduct, Lord Maginnis of Drumglass wrote on Monday.

“Amnesty International and the UN Human Rights Council have repeatedly raised the issue of Iran’s sky-rocketing use of the death penalty. The per capita rate of executions in the country was already the highest in the world long before Hassan Rouhani took over the presidency of Iran amidst promises of broad-based moderation. Yet since then, the rate has climbed to an average of three executions per day, putting the Islamic Republic on track to hang well over 1,000 people in the year 2015 alone, most of them non-violent offenders,” Lord Maginnis wrote in The Diplomat.

“Some of these victims are sure to be political prisoners, as well. The Committee to Protect Journalists routinely ranks Iran as one of the worst jailers of reporters in the world. More than 50 are known to be in custody today, and these constitute only a fraction of the overall population of prisoners who have been targeted simply for their affiliations, their public activities, or their privately expressed political and religious views. The Islamic Republic effectively retains carte blanche to execute these sorts of people by charging them with vague crimes like ‘enmity against God,’ which carries the death penalty in the theocracy’s legal system.”

“This very charge was used, for instance, to justify last year’s execution of Gholamreza Khosravi, whose only offence was donating money to the main Iranian opposition movement, the People’s Mojahedin Organisation of Iran (PMOI).”

“Other political prisoners may not be made subject to the death penalty per se, but this is no guarantee that their lives are not in danger whenever they are in custody of the regime. It is well known that Tehran utilizes torture in its interrogations, and a number of people have died as a result. It also routinely denies essential medical treatment to some inmates. In the case of Afshin Baymani, another political prisoner with links to the PMOI, it has done so for 16 years, even as he has suffered chronic pain related to severe heart disease exacerbated by notably poor prison conditions.”

“Add to these deaths the immeasurable human costs of Iran’s backing of the Assad regime in the Syrian Civil War, its connection to a July 28 bombing in Bahrain that killed two police officers, and its constant supplying of terrorist groups with money and weapons, including a large cache that was seized by authorities in Kuwait in mid-August.”

“When viewed collectively, it is clear that these activities represent a more clear and present danger to regional stability and global security than a nuclear deal that has been handled poorly by the West, but has been handled nonetheless.”

“Debate and coordinated actions are still needed on that point, but they should never come at the expense of action on Tehran’s human rights abuses and support for terrorism.”